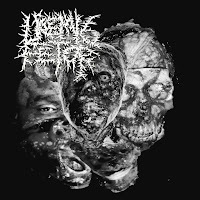 Band: Uremic Fetor
Location: New England
Country: USA
Genre: Grindcore, goregrind
Demo: Demo 2019
Label: Indepedent
Format: Streaming
Release date: August 13, 2019
It has been a while since I wrote a music review, but as I stood at my desk I decided that this needed to change. As I usually do, I started to scroll through Youtube for newly released goregrind, grindcore, and black metal. The third release I came across was Demo 2019 by a band I have never heard of before titled ''Uremic Fetor''. Uremic Fetor is a fresh goregrind band hailing from New England, USA. This demo in particular features four vile and blistering tracks, ''Stench From The Grave'', ''Liquid Meat Dialysate'', ''Dimebag Of Amniotic Fluid'', and ''Fully Engorged''. The only way I can explain the way the tracks sound is if the bands Last Days of Humanity and Rompeprop had a baby. The recording quality is raw, but has an intensity which I love that is common with all the good goregrind bands that span the globe. Down tuned guitars and spastic grunts and pitch shifted gurgles adorn this release, backed by drums with a snare sound that shifts from groovy pings to sporadic blasts and rolls. Goregrind will forever be one of my favorite sub genres, and I am glad to see bands still producing a sound that is like grotesque yet appetizing candy for my eardrums. Another thing worth mentioning is the cover art. Though it is cliché, it suits the release perfectly and reminds me of something that would be seen on Braindead Webzine. (This is the webzine that really sparked my interest in the goregrind sub genre in the early 2000's). There is not much more to say, except that I fully enjoyed this demo, and I hope to hear more from this band in the future. With just over five hundred views on Youtube, I can only wish that these guys reach the audience that they deserve. Great tunes, homies! Goregrind for life! -Devin Joseph Meaney