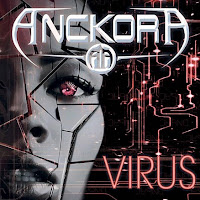 Band: Anckora
Location: Moscow
Country: Russia
Genre: Industrial/cyber metal
Full Length: Virus
Label: Independent
Format: CD
Release date: March 31, 2019
Similarly to The Kovenant, Spineshank, Deathstars and Illidiance, Anckora incorporates cyber, post-industrial and electronic themes into modern heavy metal. The penetrating future-oriented experience that emerges from this reflects the Golden Age of science fiction writing and the transitional period before the New Wave of science fiction writing. That period was crucial for the development of sci fi writing, as sci fi cinema of the last twenty years owes at least a partial debt to the imagination of Campbell and Bradbury. Cyber metal’s development beginning with The Kovenant in 1999 was likewise crucial as it branched underground metal out into new territory, creating more opportunities for bands to ride those waves. As Anckora retained some of the symphonic goth metal they started with in the late 2000s, they have potential to advance in this manner. From the first track to the last, their statement on “Virus” can be read of mankind as a virus infecting the earth, having built a consumer society with no thought beyond the immediate future. The new is obsessed over at the expense of the old, and the masses are unconcerned with what could happen in years to come. And they’re already part of the cold mechanized dystopia that Campbell and Bradbury hinted the world could become, and Anckora hint the world could become in their songwriting. The cover art comparing human DNA to the innards of a computer hints at the album’s prominent symbolism: war, life and death, media, human beings as cyborgs, and self-aware AI uncertain whether it’s a living being or a machine. The organic and electronic elements of “On the Edge,” “Alive,” “In The Fire,” “Steel Bird” and “Paris – City of the Dead” (a dedication to John Erick Dowdle’s 2014 movie “As Above, So Below”) represents this conflict, especially in the vocals which sound mechanized and mournful. It’s interesting to note that humanity is implied to prevail in the end with “The Voice of the Soul,” likely to remind the listener to retain their humanity. I wonder what James Cameron and Arnold Schwarzenegger would think of this album. -Dave Wolff