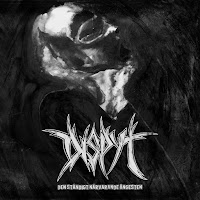 Band: DISPYT
Location: Pietarsaari
Country: Finland
Genre: Blackened crust
Full Length: Den ständigt närvarande ångesten
Label: Immortal Frost Productions
Format: CD, digital, streaming
Release date: March 29, 2019
While sitting down to check out 'Den Ständigt Närvarande Ångesten' by Dispyt, the first thing I need to say is that this album is a blackened eruption of vile awesomeness. The black metal comes on strong, but the crust is also brought to fruition with malicious fervor. Musically, this sounds to me like a cross between Mayhem and (newer) Malignant Tumour. There is almost a black and roll feel to some of these tunes, but either way, it proves to be an enjoyable Listen.
Punk aspects are brought to light (or unlight) within this album, and I can tell that if I saw these guys live there would without question be a violent mosh pit, and maybe even a wall of death. As I sit listening to Dispyt, I get an insane urge to get up and let loose within the confines of my bedroom. As I do not want to smash up everything I own, I guess I will need to settle with a session of aggressive head-banging.
As stated above, I can note sincerely how much these guys remind me of later-era Malignant Tumour. The guitar tones are similar, as are the vocals and some of the drum patterns held within this release. This is not a bad thing, as Malignant Tumour are a very talented band, who have put out a plethora of great albums in their day.
Put out by Immortal Frost Productions, an independent record label from Belgium which mostly concentrates on releasing black metal artists/bands and sub genres, Den Ständigt Närvarande Ångesten proves to be a carnage filled mass of black revelry and I highly suggest that fans of anything on the blackened side give it a listen. I was highly impressed by this spectacular album. Great job, Dispyt! -Devin Joseph Meaney