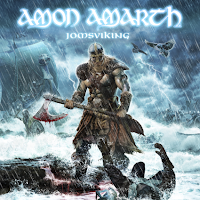 AMON AMARTH
Jomsviking
Metal Blade
http://www.amonamarth.com
If you’re a longtime Amon Amarth fan, Jomsviking won’t disappoint. It has all the elements you know and love from their past releases: melodic riffs, razor sharp guitars, inspiring lead harmonies, atmosphere, gruff vocals, mythological lyrics, stirring choruses and relentless percussion. If you’re new to this band you’ll discover why they’ve influenced countless bands since the release of their debut Metal Blade album Once Sent From The Golden Hall in 1998 and their debut Pulverised Records EP Sorrow Throughout The Nine Worlds in ‘96. I was there to bear witness as they emerged from the depths of Sweden to rape, pillage and plunder the world with their infectiously original brand of Viking metal. It’s not so much a challenge to see the renown Johan Hegg and his brigands achieved in twenty years, with minimal lineup changes. Jomsviking sees them as vital and powerful as ever, with no sign of losing their edge. The album also reflects the band’s theatrical license, being a love tragedy of epic proportions. As Hegg describes it: “…A young man is in love with a girl but unfortunately she's being married off. He accidentally kills a man when this happens and he has to flee. But he swears to have revenge and win her back. He feels that he's been wronged and his life has been destroyed.” The band approached this conceptual album as if they were composing the soundtrack to a movie, which shows in a succession of tracks that play out much like a narrative. It’s a logical progression of the band’s concept they reached on their own merit, without any pretense to sophistication or attempts to be too grandiose. All the moods you experience in these songs are honest and indicative of the spirit that carried them this far from the beginning. I’d say this is among the finest releases of 2016 already, a must have for any diehard thrasher, and I suspect Amon Amarth will be around for a long time to come. Check out Hegg’s duet with Doro Pesch of Warlock in A Dream That Cannot Be. -Dave Wolff