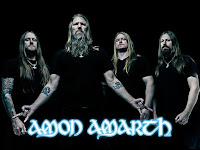 AMON AMARTH
Raise Your Horns
From the 2016 full length Jomsviking
To think Amon Amarth was just another Swedish band I liked 20 years ago, and today they’re performing for monstrous festival crowds and being recognized by Rolling Stone magazine for releasing one of the year’s best albums so far. No small achievement, taking into consideration the pitfalls independent labels have encountered since 2000. The sight of them onstage in front of thousands just thrilled me as much as when I heard Slayer were doing their first arena shows in the 1991 Clash Of The Titans tour. The fortitude of the song they released as a video to promote their tenth studio effort Jomsviking, Raise Your Horns, indicates their sound is not getting tired in the slightest. Viscerally their Viking metal is as vital as their 1998 debut recording, Once Sent From The Golden Hall. While they seek to expand their stage show and fanbase the band persist in their down to earth attitude, holding fans’ reactions as being most important to them regardless of whether they appear at major fests, medium sized halls or smaller clubs. This could well be the factor that has kept their formula fresh and untouched all this time. It’s the same as playing music for the joy of creating something, not just to make money, Having felt their earnest zealousness album after album, I’m starting to suspect this band is something special and will be one of metal’s major success stories. With Manowar planning to call it a day after their final tour in 2017, it would take a hell of a band to carry the torch through the gap they’ll be leaving behind. It may take time and effort, but Amon Amarth are one of the candidates. This video is a testament to the heights they could reach in the next few years, showing the solidarity between them, Slayer, King Diamond, Megadeth, Behemoth, Zakk Wylde, Doro Pesch, Deicide, Anthrax and others in the metal community, not to mention fans and a few sports figures. The song is an ode to partying Viking style; if you’re a beer drinker as well as a fan of melodic death metal and Nordic culture it’s hard not to get swept up in the spirit of the moment, the timeless sensibility of togetherness and companionship. From the first notes it feels like embarking on a journey to conquer distant lands, and as always it feels like the first journey. This band is untiring in their quest for sovereignty in the world of metal, and you can catch them on tour through October. -Dave Wolff