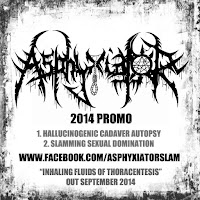 ASPHYXIATOR
2014 Promo (Inhaling Fluids of Thoracentesis)
Independent
For those who follow the most brutal and gory side of death metal, this is a great promo from Chicago, Illinois. These guys formed the band under the name “Gods Of Gore” in 2003 and released a full length album in 2005. Seems like they had a lot of free time since then, and had many lineup changes until now, as a trio they finally released a two tracks promo. Music sounds great, as everything is inspired in death metal and grind metal. Everything sounds aggressive, corrosive and quite technical. In spite of programmed drums, the band sounds direct to the bone and delivers an excellent cannibalistic miasma (if you know what I mean) in both tracks. Guitars are thick and fast enough to bite your brain from the first note. Of course there are many influences, mainly from American death/grind metal like Terrorizer, Cannibal Corpse, Devourment, etc, as well as Polish bands like Dead Infection, Decapitated, etc. I can’t say that these guys want to innovate in the genre. But, who fucking cares about innovation, if these two tracks spit blood from your speakers? Hopefully I will hear more material from them in a short time. Keep an eye on the band’s name and don’t confuse. -Victor Varas
Posted by Dave Wolff at 10:53 PM