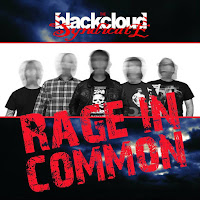 THE BLACKCLOUD SYNDICATE
Rage In Common
Independent
Toronto, Ontario’s The Blackcloud Syndicate have a singularly unique release to speak for, a conglomeration of thrash, death metal, punk, and Rage Against The Machine-style metal-hop with jazz and classical guitar thrown in for good measure. Rage In Common is their debut released in November of 2013; their musical crossover is the soundtrack to lyrics channeling the collective angst of our new generation of metalheads and bring it to anyone and everyone who could not or would not understand. This attitude is apparent from the first verse of Clenched: “Irritation leaks through pores that barely contain rage/Wandering through fools who can't see life is just a cage/Hypocrites so quick to switch, they must be double-jointed/Idiots all I expect and I am rarely disappointed.” Hey, we are aware reality is not The Brady Bunch. We’re angry at the world for a reason. If these lyrics offend you, ask yourself if you have been blind to what’s irked them all along. Or if you only paid attention to them just long enough to show them how wrong they are. It’s not pleasant, but at least it’s honest. Corrosion Of Conformity told you so in Mad World: “People today ask fewer questions/Accepting the excuses on TV.” And the Sex Pistols called the anarchy that existed in the UK even before they formed to your attention. Look outside your window and you’ll see their lyrics are still timely today. They are reflected in Fault Lines, Vice Grips, Protest The Riot and Gift Of Design. These songs show the band is angry for different reasons from their youth, but the fact that they are angry at all is what enables them to connect with the next generation of fans. -Dave Wolff