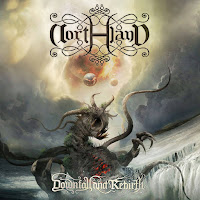 NORTHLAND
Downfall And Rebirth
Independent
I just started listening to this moments ago and I like it already. I haven’t heard folk/black metal this impressive since Borknagar and Primordial years ago. With the opening strains of When Nature Awakes, you immediately feel that you’ve entered into another world. What’s strange is that Northland aren’t from Scandinavia, but Spain. But folk metal is no longer restricted to Norway and Sweden. I remember when I first heard the epic job France’s Bran Barr did with it. Northland likewise goes a long way toward convincing you of the genre’s global appeal and how it has entrenched itself into the consciousness of metalheads the world over. The theme bringing the songs they recorded for this album reflects the modern industrial age and the negative impact it has had on nature. The band tell a tale of mankind’s folly in playing god with existence and thinking nature could be prevented from getting the last word, after all. It’s a concept that has been explored many times to be certain, however Northland manages to deliver their interpretation and make it sound as if something new is being brought to the table. The material sounds as diverse and fresh as folk metal did from ‘96 to 2000 while the pervading sense of nature and folk characteristics are more prevalent. The acoustic and electric guitars work well together with the violins; each instrument complements one another naturally, and keyboards add atmosphere from the background on more than one occasion. Bloodred Sunrise is another fine example of where Northland are taking folk metal. The female vocals and vocal harmonies in Moonlight Spell have the potential to lead the band into new and uncharted territory. The album as a whole sounds like a conceptual piece of gigantic proportions with more genuine feeling than you would have expected. -Dave Wolff