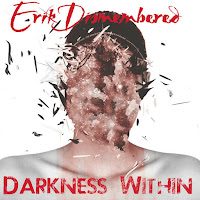 ERIK DISMEMBERED
Darkness Within
Bluntface Records
Darkness Within is a solo project from Erik Martin of the internet death metal band Critical Dismemberment. For clarification of what an internet band is, you’ll have to read Critical Dismemberment’s interview on this blog. Having devoted said band to death metal he is expanding his range of influence with this endeavor. The route he takes here is rife with remixes and industrial effects. While he is not the first extreme metal artist to experiment with those sounds, it doesn’t take much to convince you it comes from within. There’s a seemingly bottomless wellspring of conflicting emotions and frames of mind on this recording. It’s like a soundtrack of someone’s internal conflict who has been deeply traumatized by events beyond his control. Most of the songs are no longer than three minutes, however so much is funneled into those confined spaces their limited time frames enhance the almost overwhelming themes of loss, betrayal, mad desire for revenge and near psychosis. As this progresses they seem to bore into your consciousness, progressively deeper with each moment, until you reach the same level as the storyteller. By this time his demons truly are your demons and there is little if any hope of turning back. You could say it’s the musical equivalent of an account of losing one’s mind. If you’re curious to safely experience what it must be like to plunge headlong into insanity, you should check this project out. -Dave Wolff
Posted by Dave Wolff at 10:50 PM