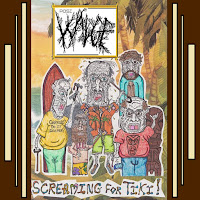 WADGE
Screaming For Tiki
Mortville Noise
Wadge is a Canadian grindcore band that releases albums with humorous themes like partying in Hawaii. I discovered the band by accident; what first struck me was Screaming For Tiki sounded like Uniform Choice gone grind. This was especially so in the vocals which reminded me of Screaming For Change. What struck me next was they parody extreme metal a great deal in their songs. I did some research of Wadge on Youtube and discovered they have several releases out. The Hawaiian parodies and the extreme metal parodies are common themes though the sound varies on each CD. On another of their full lengths they poke fun at Napalm Death and Carcass frequently, on another they do power-violence and surf, on yet another they make consistent satiric references to Don Knotts as well as one to Sore Throat on Disgrace To The Corpse Of Sid, one to the old sitcom Three’s Company and one to Elvis. From this the band has an imaginative range and something different to offer. Nothing gets too played out so the listener remains interested in guessing what they’ll have in mind next. Wadge aren’t Anal Cunt, but this release makes for a listening experience that puts a constant smile on your face. And yeah, the percussion is a drum machine, as many grindcore bands used those from the 90s to the present. My personal favorites here were Say You Love Tiki and Are You Ready For Summer. -Dave Wolff
Posted by Dave Wolff at 10:49 PM