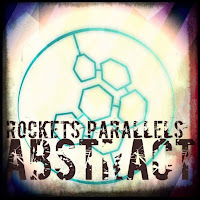 ROCKET PARALLELS
Abstract
Independent
An industrial metal band comprised of ex-members of Lateless, Russia’s Rocket Parallels released this full length recording and a few promotional videos for it in 2014 and 2015. These can be viewed along with tour diaries and performance clips at Lateless’ old Youtube addy, youtube.com/lateless09. One thing to say is there is a thorough collection of material to watch there. If you’ve heard both bands, you’ll see there are major differences between them. This band has a male vocalist as opposed to the Lateless lineup whose vocalist was female, and where Lateless were straightforward RP write more electronic/industrial effects into their material. In these tracks there are more layers and futuristic themes. The album starts with atmospheric guitars joined by a wind effect sounding like wind generated artificially by some vast machine that exists many years from now. The future envisioned by these first moments is nightmarish in scope and while there is emphasis on traditional instruments, the lines between acoustics and electronics are often blurred to the point where they become one. Rocket Parallels has gone a long way toward perfecting this approach to their music. The implications of what you hear on this recording leaves things open to progress in an infinite number of directions, if people take the time to consider how it can be achieved. -Dave Wolff