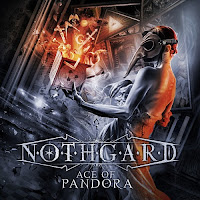 NOTHGARD
Age Of Pandora
Trollzorn Records
Age Of Pandora is Nothgard’s second full length, released in September 2014. Their debut CD Warhorns Of Midgard was released in 2011. I didn’t get a chance to hear it yet but Nothgard’s bio says it received favorable press following its release. The band aren’t Rhapsody, but Age Of Pandora is a full length of orchestral brilliance made all the more impressive since the lineup that worked on it includes three guitarists as well as a keyboardist. The band bio I received from Markus of Metalmessage promotions doesn’t make it clear who in the band is playing keyboards or if a session musician is working with them. But whoever the mystery keyboardist is, he helps to demonstrate how the band’s approach to orchestral/classical metal is maturing and growing on its own terms. There also seems to have been a female vocalist involved in the recording of Age Of Pandora; if so the bio doesn’t indicate who she is either. The liner notes would have the information as to all who had a hand in recording the material. The guitars are most prominent here, especially in the parts requiring speed and precision. Those sections are as important as the harmonies enhancing each song. And with three guitarists developing the song structure there are many opportunities for expansion in that department. One example is Black Witch Venture which starts with the theme of an 80s horror movie and contains some engaging leads. The keyboards exist to enhance the guitar progressions, giving them additional push when most needed (In Blood Remained is another song that comes to mind). What made the biggest impression on me as I listened to this album is how the guitars handled classical metal, symphonic metal, melodic death metal, folk metal, thrash tempos and blast beats with equal enthusiasm and determination to push the material forward. The band has shown much potential to expand their range in a relatively brief amount of time. -Dave Wolff