Interview with Tom Kelly of BLACK DAWN by Dave Wolff 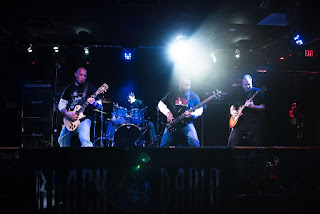 When was your first CD released? Were any songs from your demo re-recorded for it or were they all newer?
Our first album after the demo was "Absence Of Time" in 1999. Nothing on the demo was re-recorded on this album, although it does include "Hostile Intentions", which was re-recorded on "Age Of Reason" a few years later. It also includes "Bill's Song", one of my personal favorites. While I do not like the sound of this album either, it was definitely an improvement over the demo. Because of a disagreement between the band and the studio, we were forced to switch studios halfway through the project. In my opinion, this contributed to the album's poor quality.
In how many different ways did you subsequent albums mark an improvement in the band’s sound on the first? Were they improvements in songwriting or equipment or both?
As time went on, we were able to afford better equipment, and we also learned how to write and perform better.
How does the band go about composing material during practices, and choosing songs to appear on your albums?
It begins with riffs that Matt brings in. We work on the arrangements from there. The only reason we would withhold a song from inclusion on an album is if we just felt that it could have been recorded better overall, which we have done.
What songs from your most recent full lengths would you recommend the readers check out any why?
I would recommend two songs in particular from our most recent release "Until We Meet". "I Wanna Fly" has a groove that I really get into on stage. It's one of my favorites to play live, and it has been played at every show for over a year. "Pray For Me" is the closing track on "Until We Meet" and starts off with a pre-recorded intro that begins with a pair of voices vocalizing very softly. This transitions into a plethora of machine gun fire, mortars, rockets, and bombs. I had considered playing this recording when we play this live, but it would really make the venue sound just like a war zone. This recording transitions into Matt's clean-channel intro. Then comes the carefully palm-muted repeating triplets of notes that comprise the signature riff. Definitely another one of my favorites to play live. We usually close our set with either this, "December Moon", or "Dangerous".
How much of your past material is still available, along with merchandise such as shirts?
We currently have one shirt, but I am going to have another design printed up soon. All albums except the demo are still available.
Tell the readers about the show you have coming up with Prong, which you referred to earlier.
I have been waiting for this for months. So psyched to see Tommy Victor perform up close in Revolution Music Hall in Amityville, much less play the show with them! In addition to Prong and Black Dawn, the lineup includes the aforementioned Magus Beast, The Hard Way, and One More Breath, all of whom are local Long Island/New York City bands that I would highly recommend checking out. We still have some tickets for this show, and we always sell for less than what the venue or ticketing services will charge. Anyone who wants to purchase tickets can e-mail me directly.

Is Black Dawn planning to release new material in the coming year? What do you plan to do once the new material is out?
We just put what will hopefully be the finishing touches on the tracking to our next album, tentatively titled "On Blackened Wings". We are aiming for a release later this year. Once released, we will offer a new line of merchandise and play the songs live as much as we can near and far to promote the album. We will, of course, also have massive radio and press campaigns for the album.
How many songs do you have completed for the next full length so far? How do these compare with your past releases?
We recorded six. Of these, five will be included on the new album. I think it is a little of something for everybody. One song has a really slow and heavy feel like Type O Negative. One of the longer songs features a guitar solo in the middle that goes on for almost two minutes, which is uncharacteristic of prior releases. I think it is an interesting next step for us.
Black Dawn
blackdawnband1@gmail.com
-Dave Wolff
Posted by Dave Wolff at 7:45 AM