CD Review: LIMB FROM LIMB Delimbed By The Minions 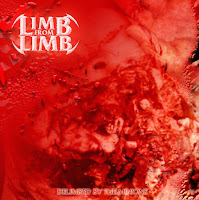 LIMB FROM LIMB
Delimbed By The Minions
Dehabiitate
http://www.facebook.com/LimbFromLimbMetal
http://limbfromlimb.bandcamp.com
I had the opportunity to review the Limb From Limb's newest offering not too long ago for another Zine. As it goes, sometimes you discover a band after they've put out a few releases, and if you're like me, chances are you'll find yourself digging through their back catalog. So, when this one came up on my radar, it was after hearing their newest material first, and then I back tracked to the band's first album called Rip Him From His Fucking Throne. As of this moment, it seems the new album is set to release soon. So, on the band's Bandcamp, this EP is the other part of the Limb From Limb equation (thus far). What is great about this band is the fact that they seem to manage to step things up with each subsequent release, and that is by no means saying that they didn't start out with an impressive debut in the first place (because they absolutely did). This EP is but a small taste of the band's progress and perhaps a hint at where they are headed as well. The band seems to push things just a little further each time, and may be more refined (so to speak), but never at the expense of the brutality. In other words, even though this EP gets in and gets out at just under 10 minutes, it definitely still packs a hell of a punch. If you're familiar with the band, you won't leave disappointed. If you're just hearing of them, and you like you're Death Metal on the brutal side of the spectrum, these guys might be right up your alley. So far, in my opinion, they've offered up a solid slab of Brutal Death Metal every time they've put something out there. This EP is no different, and the new album will likely leave your jaw on the floor, or wind up painting your walls with your skull matter. 8 out of 10 -Alan Lisanti

Track list:
1. Rise Of The Rotted
2. Relentlessly Beheaded
3. Man Shall Abolish
Posted by Dave Wolff at 7:34 AM