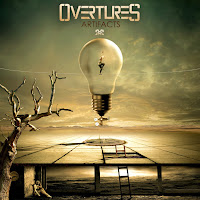 OVERTURES
Artifacts
Sleazy Rider Records
Formed in Gorizia, Italy in 2003, Overtures play progressive/symphonic metal for fans of Savatage, Rhapsody and Arcturus. From the opening strains of Repentance, their new full length Artifacts reflects its surrealistic cover art, showing they are not your average progressive/power metal band. The deviations from formula are extremely subtle, especially in the vocals of Michele Guaitoli and the keyboards/synthesizers of Paolo Campitelli and Luca Zanon. For their subtlety Overtures makes Artifacts resonate of a waking dream, or a visit to an alien dimension, bringing the stuff of fantasy to breathing life. The band has developed over the course of a demo, an EP, a handful of compilation appearances (including a Running Wild tribute released in 2009) and three full lengths: Beyond The Waterfall, Rebirth and Entering The Maze. The new album is immoderately generous with the guitars. The purpose served by the chord progressions and lead harmonies to lead the way for the symphonics is achieved by one guitarist (Marco Falanga) though you’d think there were two or more guitarists involved. The lead harmonies draw on early Iron Maiden and the band’s use of keyboards to underscore their songs (most notably Repentance and Unshared Worlds) is moderately comparable to mid 90s King Diamond. These two elements combined create that circuslike atmosphere, reinforcing their ability to carryt you to another world. The lyrics in the liner notes give you more of an understanding of where Overtures are taking their work. While listening you can even see mountains, trees and sky above, like a madman’s vision of Lord Of The Rings with Braveheart added for good measure. The band's tight precision shows their determination to remain on this quest to find their own identity while Falanga's intricate guitar solos reinforce these sword and sorcery themes. Toward the end of this adventure you may even meet a fairytale princess as vocalist Caterina Piccolo makes a surprise appearance with vocalist Marco Pastorino. The listening experience remains with you long after the album concludes. To my knowledge Overtures has produced three videos to promote this album: Artifacts, GO(L)D and Unshared Worlds. -Dave Wolff