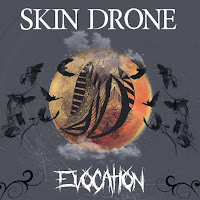 SKIN DRONE
Evocation
Bluntface Records
http://www.facebook.com/skindrone
http://skindrone.bandcamp.com
You won’t know what to expect from Skin Drone’s new CD. Is it death metal, math metal, goth metal, black metal, dark ambient metal, psychedelic metal, industrial metal, thrash metal or all of the above? Evocation’s unpredictability on their debut recording comes from a painstaking process of imagination and songwriting. It’s one of those albums that strive to thin boundaries between subgenres, defy categorization and demonstrate the technical ability that extreme metal requires. Besides this, it unapologetically rejects mainstream expectations and commercial viability in favor of their own means of combining the best of all the above subgenres. This comes first, not the prestige of being a star. A motto of the bands is, “A compliment from a true underground metal fan trumps the praises of an MTV/Viacom groupie every time.” Hearkening to a time when thrash bands were rejected from the metal world and formed their own scene, and not having an image to speak of was their image, they place their work above all else and channel their energy into making something new and different. Be prepared for the time changes the band will throw at you, but be assured they won’t incomprehensibly sail over your head. The production must be sharp to deliver with clarity, allowing the listener to keep up. That Evocation was arranged and performed by two musicians (Erik Martin and Otto Kinzel) testifies the potential the underground still has to expand musically now and will in the immediate future. From these songs you’d think it takes at least four or five members to handle the material effectively. I liken the overall mood to a psychotic’s wet dream, or the sudden feeling he would get if he somehow managed to escape the asylum. Early death metal thrived on science, philosophy and rational thought; Skin Drone is fueled by the irrational and delusional. The band members are fully aware of where their brutality stems from and exploit it to the fullest. In many ways they have more in common with GG Allin and Charles Manson than Morbid Angel and Deicide. Evocation is the closest I have heard a band come to pure insanity in a long time. The brutality here is cerebral, even more so than the black metal bands of the early 90s. The lead vocals in particular are a prime example of this, complementing the schizophrenic aspects of the music. I can’t say if this is the next wave in extreme music yet, but I can say it’s a worthy contender. -Dave Wolff