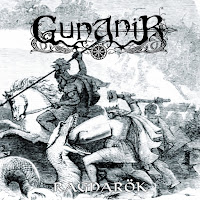 GUNGNIR
Ragnarök
Metal Throne Productions (CD)
Mercyful Hell Productions (cassette)
Place of origin: Athens, Greece
Genre: Viking black metal
Release date: February 16, 2018
Gungnir was founded in October 2016 by Nick “Yngve” Samios who was the drummer of Mortuus Sum when I interviewed him for that band back in February of 2015. It doesn’t seem that long since that interview was conducted but time flies I guess. Other bands he has been involved in are Dismal Chant, Flames, Deviser, Sirius, AfterBlood and Abvulabashy as guitarist. Samios and I have discussed the ongoing presence of occult and satanic themes in extreme metal, which he said will continue to thrive. However on their debut EP Ragnarök the band draws from themes of Norse seafarers favored by Norwegians Enslaved and Swedish bands like Bathory and Amon Amarth. Specifically they draw from the ancient sagas and myths of Norse mythology and medieval Icelandic literary works known as the Eddas. You would have to correspond with the band for further elucidation, and what the folklore means to them. Still I trust this is not a band that is relying too heavily on labels to spread their message or going out of their way to be “kvlt.” The band is named after the fabled spear of Odin (sometimes known as the Spear of Heaven), said to have been forged from Uru metal, a substance unique to the Asgardian Dimension. While avoiding labels the band does bring a rough-hewn, unprocessed disposition to their music and by first impressions you can tell they conducted a healthy amount of research for their lyrics and concept. The heated battle scene of “Intro” enhances the acerbic guitar sound and gruff vocals sustained throughout, and Fenrir the fourth track shows the band have skill at handling the war metal sound and making it their own. The bass isn’t drowned out as it can occasionally be on a band’s debut recording. The drums tended to sound too thin for the recording, but the percussion is as sturdy as the songwriting and does a lot to propel the songs forward with consistent temperament. The raven symbolism of “Outro” fits as it apparently symbolized Odin’s relationship with Huginn and Muninn. Ragnarök is worth checking out if you still listen to the Norwegian and Swedish bands of the 1990s. -Dave Wolff