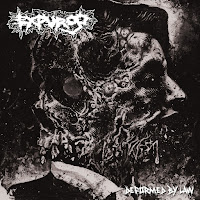 EXPURGO
Deformed By Law
Black Hole Productions (Brazil)
Place of origin: Brazil
Genre: Old school grindcore
Release date: April 5, 2018
Recorded at Engenho Estúdio Multimídia, Belo Horizonte, MG, September 2015 to April 2016.
Vocals recorded at Estúdio Riff in Belo Horizonte, MG, April 2016
Produced, mixed and mastered at ClintWorks Arts, Hamburg, Germany, May 2017
All songs composed by Expurgo
All lyrics written by Egon
Cover art by Pedro Felipe/Ars Moriende
The Brazilian quartet Expurgo play pummeling deathgrind that grabs your by the throat and hurls you around like a ragdoll. This is no less true on the band’s second CD (and first in eight years), Deformed By Law. The fury and uncompromising brutality of their debut are still present, and if anything those element have been further amped up. Deformed By Law by is harsher, crustier and meaner than its already significantly harsh, crusty and mean predecessor from 2010. Drummer Anderson Oliveira batters the skins with a greater vengeance than he did eight years ago, Egon’s vocals have developed an extra bite of venom and as a unit, Expurgo’s sonic assault has grown as hostile as any fan of extreme metal could hope for. But Deformed By Law is a strong record for reasons other than just its extremity. Mechanically tight performances, infectious energy, strong riffs and keen sense for groove make Deformed By Law an album that’s sure to delight any fan of the genre. -Ben Fitts