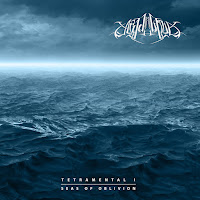 NYDVIND
Tetramental I - Seas of Oblivion
Malpermesita Records (France)
Place of origin: Paris, France
Genre: Heathen metal
Release date: January 19, 2018
Tetramental I - Seas of Oblivion is Nydvind’s third full length since 2003 and follows a split single with Bornholm (Hungary), three singles and a compilation CD earlier this year. Though the band is based in France they have a decent grasp of the Norwegian Viking metal sound and the fortitude to infuse the spirit of their country’s pagan heritage. The lines between geographical boundaries blurred years ago and, intentional or not, bands like this open the listener to pagan culture and history from a worldwide perspective. As there is a pagan revival of sorts happening in France as wildhunt.org reported in 2013 (the article seems informative though you may have to research more if you’re interested), it makes sense more black, pagan and folk metal bands have been emerging there. If you listen to Norse bands like Enslaved, Borknagar and Satyricon as well as Primordial (Ireland) and Amorphis (Finland), Nydvind is similar in attitude with a relentless forward thrust driving the material here. However the band significantly modify the multiple layers associated with those genres and add some of their own. This album has been praised for its variety and its capability to take you to places where you haven’t visited before. The band is indeed working hard to invent and cultivate these new and distant lands, and I have a feeling I’ll have to listen more than once to see all of them. To manifest them, the guitars are heavier and more melodic than usual when they need to be, the cleaner guitars more encompassing, the cleaner vocals more haunting, the atmosphere more expansive etc. Many of the transitions between these parts are more subtle, fading in from out of nowhere when you least expect them. As suggested by the cover artwork, Nydvind celebrate the thrill of the journey to distant shores as much as other bands celebrate tales of conquest, and concoct a tale or two of what you may encounter along the way. Whether they’re borrowed from legend or tales they thought up I’m not entirely certain. This is an album you need to read the lyrics to. While they’re not included on Bandcamp, hopefully the lyrics are printed in the liner notes on the CD. Still, the material on shorter tracks like Skywrath and The Dweller Of The Deep and longer pieces like Sailing Towards The Unknown, Till The Moon Drowns and Unveiling A New Earth is convincing in revealing these strange legends to you, as all promising heathen metal albums should be. A limited edition digipack release with a patch is available at Malpermesita Records’ site. -Dave Wolff

Track list:
1. Plying the Oars
2. Sailing Towards the Unknown
3. Skywrath
4. Till the Moon Drowns
5. Sea of Thalardh
6. The Dweller of the Deep
7. Through Primeval Waters
8. Unveiling a New Earth