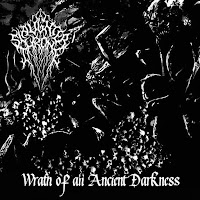 SLAUGHTER THRONE
Wrath Of An Ancient Darkness
Independent
Place of origin: Leeds/Halifax, England
Genre: Black/thrash/death metal
Released on digital format July 16, 2014
Passed on to me by former lead guitarist Andy Horry, Wrath Of An Ancient Darkness was Slaughter Throne’s only EP release before they disbanded u 2015. Before that they released a single of two songs from this EP;  as to whether copies are still available you'd have to ask him. Horry is the producer of the Tourmaline Films documentary British Black Metal: The Extreme Underground and runs the webzine/Facebook group Being With Life - Spiritual Growth and Expression for which I was recently interviewed. He has also begun contributing poems to this zine last month. Horry’s documentary is an exposé of a black metal scene in the United Kingdom which after twenty-plus years is finally starting to discover its voice in terms of aesthetics, musical direction and its stance on religion and the UK's pagan history. Slaughter Throne’s part in this scene is short lived but nonetheless important. Not only for establishing that not every new English band is a direct copy of the others, but also for the bands spawning solid releases without having to rely on blanket terms like “kvlt” and “tr00” as many bands of the black metal genre seem to be doing. In the old days you knew what the term "true Norwegian black metal" meant. I'm no expert but now there are too many labels floating around to describe a band's music. The new bands from the UK are making a name for themselves by virtue of their imagination and musicianship, owing nothing to the controversy surrounding the genre in the 90s or a need to measure up to older bands. Any band can advertise themselves as "kvlt" but Slaughter Throne’s EP speaks for itself. They do a really good job crossing over black and death metal, adding old school thrash when the need arises, tightening up the places where the genres meet. Listening to the first song Black Forest I was increasingly taken with their ability to combine dissonant chords with the crunch and anticipation-building songwriting thrash metal bands exhibited in the 80s. The song sounds like a distinguished choice to open their set with for its steady buildup, and while the anticipation mounts you can see the band playing it onstage. Later in the song there is a slow section with DM riffing and BM lead guitars. Wrath Of An Ancient Darkness and Baptizo De Sanguis are more attentive to the death metal influences though the abrasive distortion sustains their influence in black metal. Altar Of The Black Goat starts with pounding drums that lead into a purely apocalyptic black/war metal sound. The vocal delivery is strongest in this song, especially toward the end with its repeated line "we are the army of Satan" and chilling whispers in the fade out. I can’t say Slaughter Throne did anything that hadn’t been tried, but their arrangements are well thought out., The band more than make do with the influences at their disposal and I would have liked to hear what came of it if they had stayed together to record more material. If you haven’t watched Horry’s documentary yet I’d suggest checking it out and searching for the bands' Youtube profiles and official sites. Vocalist Adam Langton has since joined the Leeds band Deus Vermin and recently released a two-track EP with them. -Dave Wolff