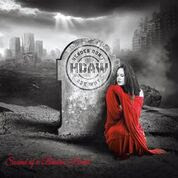 HEROES DON’T ASK WHY
Sound Of A Broken Heart
Independent
Place of origin: Finland
Genre: Melodic heavy/power metal
Recorded at: Studio Watercastle, Punkalaisun, Finland
Produced by: Heroes Don´t Ask Why and Arttu Sarvanne
Release date: May 15, 2018
By first impressions, I didn’t expect much from Heroes Don’t Ask Why. Their bio was rather brief and didn’t pack as much information as others I have read. I hardly expected to hear the richness and diversity I heard when I opted to take a chance with the band’s seven song EP. I listened to the first track Poisoned Well and was agreeably surprised. Its mournful introduction had visual as well as audial qualities; you could picture the vintage phonograph and scratchy record in a room with vintage furniture and décor. This scenery could be pictured quite tangibly from the start. The transition from the intro and the beginning of the song creates a profound effect for the listener that must be heard firsthand to be completely understood. Poisoned Well has an effective method of fluctuating between grief-stricken, inspiriting and aggressive, something like a darker incarnation of Fates Warning without the myriad time changes. Or more likely a combination of blues and Scandinavian metal added to their formula. Either way, it’s instantly perceivable that Heroes Don’t Ask Why is not a commonplace power metal band. Poisoned Well ends on a similar note to the introduction, only a vintage television dominates the scenery rather than a vintage phonograph. The marriage of sorrow and pugnacity which is becoming the band’s trademark appears in varying degrees throughout the following tracks. Twisted Paradise is thrashier than the previous track, with a dexterous, nimble fingered guitar solo in the middle. As Sound Of A Broken Heart progresses it’s increasingly evident Heroes Don’t Ask Why is as adept at establishing differing moods with each composition recorded for it. 15th of May. My Dear Friend, Wooden Box and Blink of an Eye give the listener tangible feelings of betrayal, loss and dejection, accompanied by clashing musical themes. Sound of a Broken Heart the title cut resonates a little like goth as well as power metal, somehow offering a glimmer of hope inside the song structure, lead harmonies and vocal scales, before we’re back to the stark imagery that introduced the first song. By now the old, scratchy record is finished, with the needle stuck all the way at the end. I recommend this EP to power metal fans who would be interested in an inventively written and composed collection of songs that play like a movie. -Dave Wolff