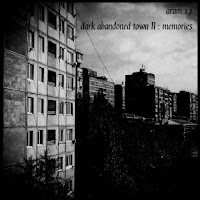 ARAM 17
Dark Abandoned Town II: Memories
Cephalopagus Records
Place of origin: Armenia
Genre: Dark ambient, occult ambient, drone
Written and Produced By Aram GH
Cover art: Aram GH
Mastering at LANDR.com
Release date: September 28, 2018
The solo project Aram 17 is one of the only dark ambient projects in the territory of Armenia, a distant and beautiful country with own unique culture and rich history. Dark Abandoned Town II: Memories was released by Aram 17 in September of this year on Cephalopagus Records. The music of this project contains different approaches and ideas, but the musician behind it opens up the world within an abandoned city frozen in time.
Cold shapeless sound canvases are sent to time-lost spaces where people once lived and where life once boiled. But time passed, and then stopped, and now there is nothing here but emptiness, frustration, oblivion and loneliness. Ghostly soundscapes slowly sneak up and deeply reveal the essence of this abandoned city frozen in time, opening the doors of perception, from behind is a frightening and completely hopeless atmosphere of doom and desolation. The album sounds remote almost to the point of complete alienation, and on the verge of losing form, doomed to deform and collapse into liquid all around us, suffocating its audience with its deep illusive echoes. Recommended for those who love the atmosphere of distant dead cities, who are fascinated by the aesthetics of these abandoned places, where the traces remain a ghostly reminder of the transience of being. -Serafima Okuneva
Lineup:
Aram GH: Programming
Track list:
1. Black Atmosphere With The Fog
2. Gloomy Gates
3. Statue Of Sinner
4. Forest Near The Town
5. Night Spirits
6. Memories Of The Abandoned Town
Posted by Dave Wolff at 10:01 AM