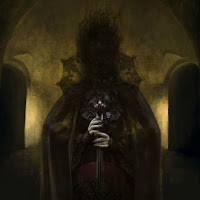 ALCHEMY CHAMBER
Opus I: Subtle Movements From Within
Independent
Place of origin: Vancouver, British Columbia, Canada
Genre: Neoclassical instrumental metal
Recording by Kyle Anderson (Blue Light Studio) & Mark Mckitrick (Rain City Recorders)
Mixing by Kyle Anderson
Mastering by Greg Mindorf (Suite Sound Labs)
Artwork by Eugenia Bathoriya
Artwork modification and album layout by Mehmet Turan
Release date: October 6, 2018
Heavy metal and classical have been associated since the days of Eddie Van Halen, Yngvie Malmsteen and The Great Kat. In a time when metal wasn’t taken seriously and viewed as music for disenfranchised under 21s bands and solo guitarists strove for respect by showing how two seemingly unrelated genres could be crossed over. Those days gave rise to classical metal and symphonic metal in the 90s, along with projects like Elend who crossed over classical, gothic music, electronic and industrial (Les Ténèbres du Dehors was one of the 90s’ best albums, being a full blown orchestral opus that could have given many of today’s composers a run for their money). Alchemy Chamber represents the logical progression from those days as they take the crossover further. Alchemy Chamber is made up of classically trained musicians who write ten instrumentals integrating different genres of metal and classical, arranged in new and complex ways most bands wouldn’t have thought of in the 90s. The songs are listed in the order in which they were written to guide you through the composing process. They are designed to allow you to draw your own conclusions as to how they should be interpreted, and arranged in a way that resulted from years of planning, without a need for lyrical content to enhance the experience. Opus I was released six years after the band formed, and the songwriting was not something they took lightly. The classical and metal elements more than complement each other as on countless albums by other bands; they communicate, interact, relate to one another, allow each other to grow without pushing too hard, thrive on their mutual energy and open up new modes of expression. It’s difficult to choose personal favorites from these tracks as each of them establishes a different mood and leads you through distinct labyrinthine paths that seem removed from one another but are vital when it comes to the big picture. When listening to Opus I you have to follow the band’s creative process and decide for yourself which instrumental made the biggest impression. Whichever track it turns out to be, Opus I will hold your attention from the first notes to the last and there are many chances to anticipate what you hear next. -Dave Wolff