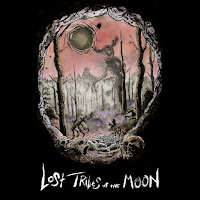 LOST TRIBES OF THE MOON
Lost Tribes Of The Moon
Independent
Place of origin: Milwaukee, Wisconsin, USA
Genre: Doom metal
Recorded by Shane Hochstetler, Howl Street Recordings
Mastered by Carl Saff, Saff Mastering
Mixed by Shane Hochstetler and Lost Tribes Of The Moon
Release date: September 8, 2018
Lost Tribes Of The Moon is definitely a different kind of metal. Which isn't a bad thing whatsoever. Especially if you like something a little more unique. Plus, they just so happen to get their namesake from none other than the master of horror Clive Barker. If you're not aware of who he is, well then, you must have been living on the moon yourself. Anyways the name comes from Clive Barker's Nightbreed. Anyone who's ever seen that movie knows that it's a little demented, maybe even grotesque. I imagine the graphic novel's more so but I've never had the pleasure. Sadly I was unable to locate the lyric sheet for the album but I'm sure they borrow from the mythos of the source material. Regardless of that they are tight-knit group of individuals who easily transport us to another scope of being and seeing things. To me that is the essence of pure art. I love to be escorted elsewhere, as I'm sure most everyone else does, as well. So, if that is the case, then kick your feet up for a spell and let Lost Tribes Of The Moon conjure something up for you. There you have it The Good, The Bad and The Ugly. -James K. Blaylock