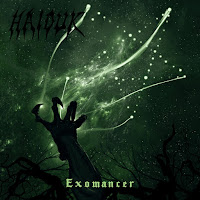 HAIDUK
Exomancer
Independent
Place of origin: Calgary, AB, Canada
Genre: Blackened death metal
Release date: October 17, 2018
Make it loud! After nine long years and three albums, finally a unique one-man-band called Haiduk has declared itself loudly and decisively. Luka Milojica’s album Exomancer, released in October, is a confirmation of cruelty, rage and hopeless darkness in the format of  death metal with black metal rage. Mind-blowing! This Canada-based musician has long identified apart from the mainstream, releasing his own rare, but interesting albums, fierce and absolutely beautiful in their aesthetics and technicality. Noteworthy for me are the compositions, which are instrumentals with no choruses or verses. Chaotic structures are very smooth on the ear. With fast rhythms with broken junctions you won’t get bored as you are constantly in enthusiastic tension. The underhanded disalignment induced by the music creates narrow portals into secretive but wide spaces. The effects can be dizzying, submerging you in vaporous twilight that is neither here or there. Aggressive riffs, tremolo, confident percussion and unexpected transitions competently dilute infernally tough vocals. Luka Milojica thrives on universal evil and hopeless worlds in his music and lyrics, and with his creativity continues to independently release his albums. I hope this universal rage continues to delight lovers of infernal sounds with their amazing independent works. Hail Evil! -Serafima Okuneva