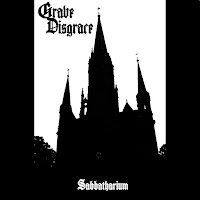 GRAVE DISGRACE
Sabbatharium
Black Cardinals Records
Place of origin: St. Petersburg, Russia
Genre: Stoner, doom metal
Release date: July 5, 2018
Dark lords Grave Disgrace from Saint-Petersburg, Russia released their fourth LP Sabbatharium on their own label Black Cardinals Records in July of this year. The name of the album speaks for itself, directing listeners to the gates of the dark sound sabbath, passing through which you can feel how magic shall reveal itself in time and effort of listening and if you dedicate that time, the reward is north of a thousand fold. Epic doomed and psychedelic mood like a keynote of the album revealed in the most amazing, heavy and confident passages of each instrument from track to track.
Superb drummer is impressive! It sets a confident tone for moderate but assertive rhythm and killer groove of album. Incredibly fuzzy tone, plodding, downtrodden riffs, solos and noisy psych sound of guitar make bright memorable and sometimes magic atmosphere in the album. Alexey's bass easy and pleasant to hear because of strong fuzzy heavy sound. And vocal! Oh, Gods! It's burning the shrouds with his epic and, at the same time, imposing and gifted voice, being one of the most charismatic singers of Russian underground scene for me.
One of the brightest, explosive and memorable tracks in the album without a doubt is Atomic Victims. It's starting with eerie and hollow noise, changing to hard rock psychedelic passages, stop times, and subsequently iridescent into a dragging slow and very energetic sound wall. Stunning, confident vocal combined with blues-rock guitar passages sound very, very deeply. Interesting track and ends moving from doomy drawings in a formidable drone. The next track The Grim Aftermath picks up the previous wave, developing this blues-psychedelic mood, turning the sound track into a dizzying blues journey. Their guitar tone glows with muted, dark, subtle colors of Earth and magic. Swampy blues, psychedelic lyric mood. I would also like to especially say about track Everlasting Fire. I think that it's one of the darkest fascinating and heavy tracks in the album! Minor harmonies with a triple confident attack sound very depressing and at the same time sublime, especially when this crazy singing, bright guitar patterns.
These are not very long tracks in the spirit of traditional doom like we can listen in the previous album The Mystery of The Dead Revive. This is a very sweepy, extremely heavy and epic psychedelic journey on the verge of hard rock with respectable production with no compression or loudness issues and a deep rich tone of their music. Grave Disgrace have gone back to their roots, whilst also evolving and finding creative outlets to showcase the band’s softer side and influences. There is a lot of energy, a lot of work and impressive result. Sabbatharium sounds like a hymn to doom metal and announces the forthcoming dominion of doom cult on planet Earth. A must-have album for all fans of doom, heavy psych madness and cruel heavy sound. -Serafima Okuneva