EP Review: THE NEGANS Take It Like A Champ (Independent) by Dave Wolff 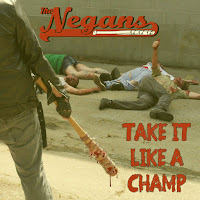 THE NEGANS
Take It Like A Champ
Independent
Place of origin: Medford, Massachusetts, USA
Genre: Horror punk
Release date: October 5, 2018
It was bound to happen. A band with a concept based on the most memorable villain on AMC these days. If you like punk and The Walking Dead you’ll like The Negans. Being a fan of horror and punk rock and roll for years, I was intrigued by their concept and wanted to check out their EP Take It Like A Champ. It’s not surprising the Negan character resonates with TWD fans since he is one of horror’s most engaging and complex antagonists. Fans have compared Negan to Machiavelli and the writings of George Orwell and his character development makes for a villain with substance and depth. If The Negans intend to remain active there are many possibilities for evolvement. Jimi Halfdead’s portrayal of Negan fits the background music, capturing and reinterpreting the pathological menace of Jeffrey Dean Morgan’s performance as direct quotes from TWD are part of the lyrics. The five songs on Take It Like A Champ personify the Boston punk sound, with Misfits and GWAR brought to the table in "The Saviors". "Shut This Shit Down" starts without warning and without an intro, with infectious energy that draws you in easily. Going back to the philosophical potential I described, the line “eeny meeny, miney, moe, where you land, no one knows” can also be taken as a metaphor for real life… just a random thought. "Pee Pee Pants City" leans closer to street punk while "Redneck Zombies" is the EP's most energetic song, again infusing Misfits. "I Love Lucy" is an interesting closer to the EP, comparing the weapon Negan used in TWD to a special romantic partner as Morgan had in the series. There is more to peruse as several live shows can be viewed at the band's Youtube profile along with a promotional video for "Shut This Shit Down". -Dave Wolff