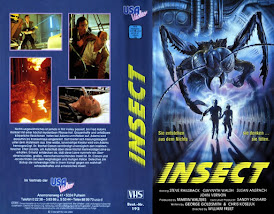 Blue Monkey aka Insect
Release date: 1987
Movie label: Dark Force Entertainment/Code Red
Director: William Fruet
Film length: Approx. 96 minutes
Cast:
Steve Railsback - Detective Jim Bishop: A police officer who brings his partner to the hospital with a gunshot wound but quickly finds himself helping Dr. Carson hunt down the creature.
Gwynyth Walsh - Dr. Rachel Carson: An emergency room doctor who finds herself hunting down the film's creature along with Detective Bishop.
Susan Anspach - Dr. Judith Glass: The other doctor on call at the time of the outbreak, Dr. Glass rushes to stop the spreading infection started by the creature.
Don Lake - Dr. Elliot Jacobs: An entomologist summoned to the hospital in order to analyze the insect-like creature before its growth.
Sandy Webster - Fred Adams: An aging handyman who becomes "patient zero" for both the infection and the creature of the film.
Helen Hughes - Marwella Harbison: An elderly woman who unwittingly starts the infection after ordering a new species of plant for her greenhouse.
John Vernon - Roger Levering: Greedy, corporate Hospital Director
Greetings from the tomb! My ghoulish cryptians and HAPPY OCTOBER! To all and a happy frightful Halloween to everyone. Tonight we feast on Dark Force Entertainment/Code Red release from the very depths of the VHS realm Blue Monkey (Insect) we received this at the tomb with such happiness after the mailman wandered lost and was ripped apart we took the package and enjoyed! This offering. Dark Force Entertainment did a remarkable sensational job with a BRAND NEW HD TRANSFER from the original UNCUT 35mm negatives with extensive color corrections which Dark Force Entertainment is growing a fast reputation for bringing the color out of these films very much back to life.
The film starts Fred Adams a local handy helping out in Marwella Harbison greenhouse Fred sees an odd looking plant and thinks it's dead or something is wrong with it he then touches it and realizes the plant has no thorns once he walks out he becomes very sick and that my ghouls making Fred (Patient Zero) in the movie. Marwella explains it’s a Volcanic plant from a new volcanic formed island off the coast Micronesia then Fred is rushed to the hospital and this white turd looking creature just pops out of his mouth spewing all this stuff after finally Dr. Rachel has it kept and examined then kids that live in the hospital who have cancer and other illnesses drop liquid on this parasite and the growth is a giant insect killing everyone in the facility one by one and keep them in these crazy looking cocoons.
This film is done in a 50's style type giant insect movie but mixed with modern and more gory and over the top FX the suspense's is very elevated in this film with the search of the insect as it begins to grow as Detective Jim Bishop and the hospital staff look for it and Dr. Elliot Jacobs an entomologist helps with his knowledge of insect and really being amazed and shock with the growth of the insect and how it makes babies the insect reveals it's a hermaphrodite and starts drop eggs everywhere.
All and all I give this movie 7 out of 10 zombie heads it is visually and at grabbing your attention awesomely amazing leaving you hooked through the entire film plus Thank You!!!!!!! so much Dark Force Entertainment for making a glow in the dark insect slipcover for this amazing Blu-ray which has beautiful and breath taking artwork and glow in the dark cover that just pops out. I can honestly say I didn't expect for this movie to be picked out of the VHS realm Dark Force Entertainment/Code Red have really been surprising all horror fans around with their releases and , Hey Dark Force Entertainment/Code Red do it Right!
Take a chance purchase this movie Directly from Dark Force Entertainment for their DARKFORCE SUPER STORE at Dark Force Entertainment. –Gene Olivarri
Posted by Dave Wolff at 1:24 PM