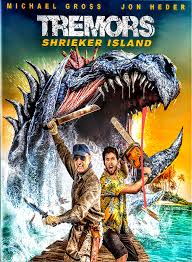 Tremors: Shrieker Island (2020)
With Jackie Cruz, Michael Gross and Jon Heder
Directed by Don Michael Paul
Written by Brian Brightly and Don Michael Paul
Companies: Living Films, Universal 1440 Entertainment
I recently went on a random adventure to Walmart with my friend Amanda. During this expedition of perusing, observing, and genuine boredom killing, I happened to run across a seven-movie collection of the Tremors series. This at first threw me for a loop, as I had watched all six movies and could not figure out how they got seven movies out of the collection. Then I remembered that I heard they were making another film a while back, and at this point I was pretty excited. The new film was out... and although I did not have the funds to buy the seven-movie collection, I knew that I had to watch this film. I absolutely had to!
Within a few days, I had landed a solid stream of the film (sorry to the production company. I absolutely DO plan to buy the movie at some point). And after a long day, I loaded up the stream, and prepared myself for a long overdue graboid, shrieker, and assblaster adventure.
The first two movies are pure gold, with my overall love shifting a bit towards the sequel. Three was pretty good, four was great, and five and six were both ''good''... but did not hit the same mark as the originals. (Though I still love them dearly). I did not know what I was getting into, but after watching the seventh film, ''Tremors: Shrieker Island,'' I realized that this movie was pretty damn solid. I still think Tremors 2 is the overall best in the long run, but I actually preferred this film to five and six.
Now, although the name of the film was ''Shrieker Island,'' there were graboids. Four of them, to be precise. But all through the film not a single assblaster was seen (which is no huge deal, because I find shriekers to be the coolest of the morphology of the creature anyway).
The animatronics and puppets of the original films were preferred, but in the seventh film I found that the CGI used was improved upon, even if just slightly. And the film was laden with humor and cheese, which is something I hold dear to my heart, and the film would have not been the same without it.
There was action, gore, and a handful of loveable new characters to the series. But as always (at least after the first two) the film hinged almost completely on the awesomeness of Michael Gross' character Burt Gummer (which is obviously a-ok, because without Burt, I don't think the series would have reached its max potential).
So overall, this movie was an absolute winner, and without releasing way too much information, I would suggest that anyone who has enjoyed Tremors in the past checks this one out. And even if you never heard of Tremors, although you may not get some of the references by the seventh film, I'm sure you could probably enjoy this one as well.
Just keep a box of tissues handy... and no, don't ask why! –Devin Joseph Meaney
Posted by Dave Wolff at 12:54 PM