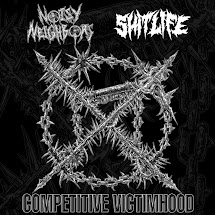 Band: Noisy Neighbors
Location: San Antonio, Texas
Country: USA
Genre: Grindcore
Band: Shit Life
Location: Detroit, Michigan
Country; USA
Genre: Grindcore
Split: Competitive Victimhood
Format: CD (limited to 200 copies), streaming
Label: Independent
Release date: October 16, 2020
Over the last little bit, I have really been slacking on my reviewing duties. In between releasing my own music and working on fiction, review writing has kind of fallen to the wayside.
Earlier today, Dave Wolff from Asphyxium Zine sent me a short split. When Dave sends me stuff there is usually a 4/5 chance that it is something highly enjoyable... something I can sink my teeth into. And just like most cases, the split he sent me was no different. The split in question is ''Competitive Victimhood''... a two way between the two U.S. grind outfits Noisy Neighbors and Shit Life. I have heard of both these bands but didn't know much about them. But as of today, I can honestly say I am keen to their existence.
The grindcore on both sides of this split is well done. Personally, I am leaning towards favoring the Noisy Neighbors side, but honestly, only by a small increment. The Shit Life side is a tad more raw, and the Noisy Neighbors side of the split is a bit tighter sounding (in my opinion). I think what really wins me over to the N.N. side of the court is the percussion. The drumming is really tight (amazing actually), and the tone of the snare and rolls really hit home (for me). With all that said, Shit Life is pretty damn great too, and I would encourage anyone who is interested in grindcore to give both these bands a listen. Hey... it wouldn't hurt, eh?
Noisy Neighbors are from San Antonio, Texas since 2018. Shit Life are from Detroit, Michigan since 2009. This split was self-released in digital format October 2020. The physical CD release should be out by November 2020. There was also a little note on Youtube. If any person or label wants to release a 7'' version of this split, please get in contact with the bands. They would really appreciate indulging in your vinyl goodness!
So, when push comes to shove, this is a pretty damn good split release. So, you should for sure go listen to it. And if not, well... fuck off then! Devin out! –Devin Joseph Meaney
Lineup:
Noisy Neighbors
Shane Elwell: Guitars, vocals
Mike Garrison Guitars
Walter Howard: Bass
John Katastrofe: Drums, vocals
Shit Life
Chris Revill: Guitars, vocals
Zach Gibson: Drums, vocals
Track list:
1. Noisy Neighbors - Cheap Heat
2. Noisy Neighbors - Dead Serious
3. Noisy Neighbors - Making Things Worse
4. Noisy Neighbors - Terror Pact
5. Shit Life - The Church of Real Grindcore
6. Shit Life - Unlimited Stupidty
7. Shit Life - Rage on Behalf of the Machine
8. Shit Life - Fear of Hydrogen Cyanide
Posted by Dave Wolff at 6:23 PM