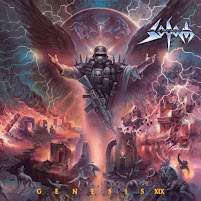 Band: Sodom
Country: Germany
Genre: Thrash metal
Full Length: Genesis XIX
Format: Digital album, digipack CD, double vinyl LP (Entertainment One)
Label: Entertainment One (North America), Steamhammer/SPV (Europe)
Release date: November 27, 2020
Many cite Kreator or Destruction as the German thrash band to die and kill for; while I hold them in high regard it’s always been Sodom for me. I’ll confess when I was introduced to “In the Sign of Evil” I thought it was the worst thing I ever heard. But while my initial impression of that EP was that it was completely talentless and unprofessional, something about it engaged me. The counterbalance to the perceived lack of ability was the frenzy they displayed, the certain conviction I can only describe as the “Sodom sound”. An assured, almost regal, attitude that returned on “Obsessed by Cruelty” and the “Expurse of Sodomy” EP. It was one part solitary and nine parts diabolic, and finally hooked me. No matter how often their sound fluctuated they held firmly to it. Naturally I jumped at the chance to hear the advance download of the upcoming album “Genesis XIX” from Earsplit PR. I’m more than contented to say the “Sodom sound” is alive and well, and that frontman Tom Angelripper is reunited with guitarist Frank Blackfire who appeared on “Expurse,” “Persecution Mania” and “Agent Orange.” With a new lineup, a return to Tom Angelripper’s working class neighborhood and a rehearsal space described as “ratty,” the band readied themselves to record a rugged, unbending thrash album that respects its roots. If you’re a long-standing Sodom fan you won’t be disappointed in the slightest. It’s not pretty, it’s gruff, raunchy, aggressive and unforgiving, and in every way reflects the band’s industrialized environment as well as their NWOBHM roots as faithfully as ever. “Genesis XIX” was recorded only with analog material, which explains its organic assailment on the senses. Don’t expect something formulaic however; the variety of elements brought into the mix are traditional thrash, metal, punk, blues, hard rock, and black and death metal. Tom Angelripper has always taken liberties to write unsettling, thought-provoking lyrics, and continues to do so here. His chosen subject matter this time includes serial killings, US fighter pilots in the Vietnam war, Western culture and Melville’s classic novel “Moby Dick.” This should be enough praise for the album, check it out upon its release and judge for yourself. –Dave Wolff
Lineup:
Tom Angelripper: Bass, vocals
Frank Blackfire: Guitars
Yorck Segatz: Guitars
Toni Merkel: Drums
Track list:
1. Blind Superstition
2. Sodom & Gomorrah
3. Euthanasia
4. Genesis XIX
5. Nicht mehr mein Land
6. Glock N‘ Roll
7. The Harponeer
8. Dehumanized
9. Occult Perpetrator
10. Waldo & Pigpen
11. Indoctrination
12. Friendly Fire
Posted by Dave Wolff at 7:13 PM