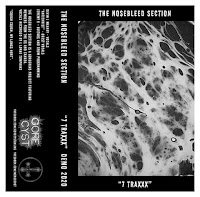 Band: The Nosebleed Section
Country: USA, Canada
Genre: Goregrind
Demo: 7 Traxxx
Format: Cassette, CD, digital
Label: Gorecyst Records (cassette), Morgue Rot (cassette), Morgue Rot (CD), Spettro Records (digital)
Release date: TBA
While listening to The Nosebleed Section I took time to watch a video from an independent Youtube channel, Killbot & GorGor Attack. The video is called “Not All Goregrind Sounds Like Carcass’ and discusses the difference between goregrind bands seeking to recreate Carcass’ early albums and goregrind bands recording with organs and synthesizers, recording with clearer production, writing songs with groove and technicality. It also discusses differences between grindcore, goregrind, pornogore, deathgrind and powerviolence. Coming from a fan of various subgenres who can make distinctions between them, the video suggests said subgenres can evolve as much as any other can. It was something I needed to hear and I would recommend this channel to anyone since there is much more subject matter to choose from. With the help of extreme music supporters including Devin Joseph Meaney, I’ve been hearing of bands who are helping goregrind evolve by releasing albums and EPs with much shorter durations. Meaney’s project The Nosebleed Section is one of them. Their debut “Goregrind Demo 2018” was about six minutes in length and their new demo “7 Traxxx”, released a couple of weeks ago, is less than four. If you don’t normally listen to goregrind or the other genres I mentioned, this release will pass you by before you know what’s happening. If you’re a longtime listener you’ll appreciate how The Nosebleed Section are reaching for their own identity as a goregrind band. As both releases show they don’t typically write about butchery, carnage and slaughter; instead their songs seem to be about internal anguish and manic psychosis, expressing it through one metaphor or another. I gather as much since the Youtube link to this stream didn’t include the lyrics. Still, Meaney and guest vocalist Antichrist enunciate more clearly than most grind vocalists, even with the effects added. While the drums are provided by programming from Jeremy K, this and his guitars (as tight as they are distorted) give each track solid structure. It was generally a good idea to make this release so short as it doesn’t become too tedious or overstay its welcome. –Dave Wolff
Lineup:
Devin J Meaney: Vocals
Antichrist: Guest vocals
Jeremy K: Guitars, drum programming
Posted by Dave Wolff at 2:25 AM