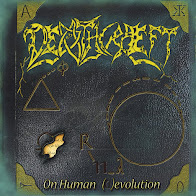 Band: Deathcraeft
Location: Ioannina
Country: Greece
Genre: Death/Thrash Metal
Full Length: On Human Devolution
Format: Digital album, limited edition compact disc
Label: Independent
Release date: July 5, 2020
The Greek death-thrash metal band Deathcraeft was formed by Konstantinos Kalampokas, who was a guitarist for the Greek death-thrash band Spider Kickers and live guitarist for the Greek black metal band Varathron. Kalampokas formed Deathcraeft in 2017 and with his fellow musicians spent three years developing “On Human Devolution”. While devising a sociopolitical story with Lovecraftian metaphors is nothing new for metal, Deathcraeft create an expressive debut that inventively retells the Cthulhu Mythos. “On Human Devolution” reaches operatic heights with its diverse vocal range, interflowing old school thrash a la Testament, Megadeth and Possessed with death metal vocals and blast, the abrasiveness and intensity of black metal and orchestral song structure.
Celtic Frost were adept at exploring the decline of ancient civilizations on “To Mega Therion” and “Into The Pandemonium”. In contrast Deathcraeft explores the decline of present day civilization due to its own hubris, no matter how much it’s concealed behind its facades. If mankind won’t recognize its own hubris, “On Human Devolution” seems to say, it deserves what it gets. Do people offer salvation or deny it to others for their own benefit? Do they teach by love or fear? Do they reach for higher spiritual planes or scale the Tower of Babel? “On Human Devolution” suggests the time for answers is past, as the ancient gods have arrived to deliver the discontentment of the deceived souls of centuries past. As these gods are beyond good and evil, they mete justice according to man’s true soul.
What’s special about this album is the music, vocals, lyrics, classical overtones and atmosphere all contribute to the story, presenting it as convincingly as the most heartfelt recordings of Malmsteen, Dio and Judas Priest. On top of the influences listed earlier, there is even a hint or two of Rob Zombie added here and there. Feeling and passion are as integral to this album as technical prowess. The pervading sense of impending, inevitable doom that is to come when the old deities return is as integral to the story as anything else. It’s all the more intense because we already know what is coming, and that the mass destruction awaiting humanity cannot be stopped. The pride, greed, lust for power and control in each person, and the propensity for humans to turn on one another and survive at the expense of others contributes to the growing sense of fear as tangibly as anything else, until the human race falls into oblivion.
For all this, “On Human Devolution” seems to have an open ended finale that questions whether mankind is doomed or will somehow survive the coming apocalypse. As the soundtrack to an apocalyptic movie that likely can never be made, this album is a must have for fans of each subgenre of metal it draws from, and a sure candidate for 2020’s finest moment for metal in general. –Dave Wolff
Lineup:
Nikonas Tsolakos: Vocals
Konstantinos Kalampokas: Guitars, bass
Giannis Chionidis: Drums
Track list:
1. The Ritual
2. Beginning of the End
3. Spreading Lies
4. Welcome to Oblivion
5. Survival
6. Daydreaming in the Abyss
7. Paving the Way
8. Free into the Void
Posted by Dave Wolff at 11:47 AM