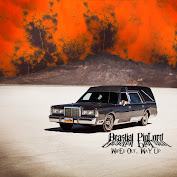 Band: Beastial Piglord
Location: Kinston, North Carolina
Country: USA
Genre: Extreme metal
Full Length: Wiped Out..Way Up
Label: Misanthropik Records
Format: Digital album
Release date: September 12, 2020
It’s October of 2020 and Hudson Conner still has an inexhaustible supply of music to go stark raving mad by. It’s frightening how consistently Conner has released Beastial Piglord material since he started in 2018. But his latest release “Wiped Out..Way Up” is testimony that he has an infinite amount of ideas to share. As I indicated in past reviews, what’s most distinguishing about Beastial Piglord is that each full length contrasts the last. “Wiped Out..Way Up” doesn’t sound anything like past Beastial Piglord releases, and it’s an album you”ll have to play at maximum volume to get its full intended effect. Unlike "Viorensilt" depicting your surroundings as lifeless and devoid of animation, “Wiped Out..Way Up” is a represents violence, gore, pain, suffering and anguish at its most graphic and real. The songs on “Wiped Out..Way Up” were recorded with industrial elements, atmosphere, ethereal effects, otherworldly sounds, disembodied voices, more time changes, shades of hip hop and groove death metal, and tortured wailing from a place beyond that makes hell seem a vacation resort. These are equivocally interbred into a framework of nu metal, as if Korn was formed of asylum inmates, or better yet the demented, psychotic freaks of the “Hostel” movies who get off on physical torture. Despite the negative connotations sometimes connected to nu metal, this is in no way mainstream radio friendly nor intended to appeal to the uber cool who do all their shopping at the malls. The ironic thing is, if nu metal bands picked up on anything Conner wrote for this album it would be credited as paving new ground. Besides Korn I heard similar themes to Sepultura, Soulfly and Cavalera Conspiracy in the vocals and guitars, providing a sense of savagery that enhances the stuff of nightmare that is now synonymous with this project. Beastial Piglord is not a project challenging the mainstream like gangbusters, and they may not receive fame and fortune, but it’s a project chipping away at traditional musical standards piece by piece, in a time when there is more of a need for it than ever. –Dave Wolff
Lineup:
Hudson Conner: All vocals and instruments