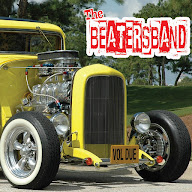 Band: The Beatersband
Location: Rosignano Solvay
Country: Italy
Genre: Rock and roll, punk rock
Full Length: Vol Due
Format: CD, digital
Label: Independent
Release date: September 7, 2020
“Vol Due” is the new release by The Beatersband, a “vintage punk rock and roll” band dedicated to modernizing classic pop and rock and roll from the fifties and sixties. They describe this process as giving pop and rock new life while retaining their original soul. The band has been promoting “Vol Due” on Facebook, Youtube and Bandcamp since its release last September. My initial impressions of this album were that the musicianship was too subdued and restrained. After a couple more listens I started to perceive something a little more creepy and sinister. I began to comprehend the noirish feeling of Little Steven’s Underground Garage radio program. The sort of dangerous pirate radio vibe that’s practically nonexistent on college radio. Rock and roll’s impact then happened because its fusion of blues, jazz and country with increased volume was something that had never before been done. This being said, it’s almost a no-brainer that it influenced on the birth of punk when early punk bands looked to the fifties to strip rock music back to its basics. From their consistent back beat, guitar bite and femme fatale vocal overtones I gather The Beatersband has a firm grasp on the vibe I’m referring to. “Vol Due” is not exactly a pop punk album but leans closer to Blondie, The Pretenders, Elvis Costello and The Ramones. Basically it’s an album with commercial potential that doesn’t relinquish its musical foundations. The Misfits made a similar statement in 2003 when they covered rock and roll classics on their “Project 1950” EP, only The Beatersband’s approach seems to be a little more lighthearted in comparison. As for whether or not you’ll get something out of listening to this album, it really depends on what kind of a punk fan you are and whether or not you’re a fan of fifties rock. I won’t preach about being open minded but if you’re receptive to the similarities between both genres you might like this. –Dave Wolff
Lineup:
Donatella Guida: Vocals, guitars
Leonardo Serrini: Bass
Mario Manetti: Drums