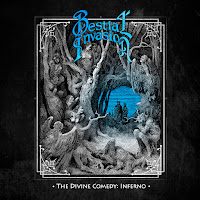 Band: Bestial Invasion
Location: Zhytomyr
Country: Ukraine
Genre: Technical thrash metal
Full Length: Divine Comedy: Inferno
Format: Compact disc, digital album
Label: Independent
Release date: November 14, 2021
We are back! Another day another album review and this time we are taking a trip down memory lane to when things were fast, heavy and groovy with a taste of ‘Thrash’ let me introduce you to the latest album by
Bestial Invasion Divine Comedy: Inferno
So this album came out on the 14 of November this year and ranks as their 4th album but the 1st for my ears!
What’s interesting is as the band’s name suggests they are called ‘Technical Thrash’ but to me honestly I get more of an 80’s Hair Metal vibe mixed with New Wave Of British Heavy Metal. I mean yes you could argue they are representing the old school very early era of 80’s Thrash more in line with albums like
Anthrax –Fistful Of Metal
Slayer -Show No Mercy
So that’s most likely the era they are defining themselves as with more emphasis on the technical instrumentation which really does set them apart regardless which genre they were inspired by as they rank more skilled (in my opinion) with the playing then most of all three influences.
To me, when listening to this album I felt a rush of nostalgia, this felt like the first time I heard bands like Dio, that amazing and passionate vocal performance, the heartfelt and intense guitar work I mean I feel these things are just lost in time.
See, it’s one thing for a band to be able to ‘play fast’ or ‘sing good’ but how many new artists or bands really put their heart and soul into it like they did back then? How many Princes are left in the world? Where every song/album was saturated with emotion, passion, energy, charisma, style, swagger, creativity, originality I mean it’s unfortunate a lost art but these guys are bringing that era back! I love the raw aesthetic this album brings, it’s as if this band had only one goal in mind when making this album.
‘Let’s make a kickass album and let’s put all of our mind, body and soul into it’ and honestly with just a mindset like that you can strike gold. These 9 tracks aren’t just independent tracks of music they all represent one big narrative, every song feeds into each other with so much grace, power and totality that you couldn’t imagine taking even one minute out of any track let alone any one song! Everything that’s on this album is here for a reason and that’s what will make this album stand the test of time in my opinion.
What more must I say? This is a badass record and it deserves all the attention coming its way. –Corban Skipwith
Lineup:
Vakhtango Zadiev: Vocals
Serg MP (Metal Priest): Bass
Alexander Klaptsov: Rhythm guitars, acoustic guitars
Denis Shvarts: Solo guitars, keyboards
Andrey Ischenko: drums
Track list:
1. Limbo
2. Lust
3. Gluttony
4. Greed
5. Anger
6. Heresy
7. Violence
8. Fraud
9. Treachery
Relentless Reviews with Corbz
Posted by Dave Wolff at 2:58 PM