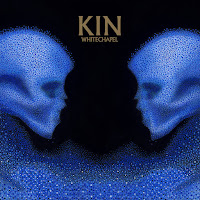 Band: Whitechapel
Location: Knoxville, Tennessee
Country: USA
Genre: Deathcore
Full Length: Kin
Format: Digital
Label: Metal Blade Records
Release date: October 29, 2021
I feel before giving my review on this album I have to take you all back a decade or more possibly
When I was in high school all my closest friends were listening to Whitechapel as well as other bands like
-Motionless In White
-Asking Alexandria
-Parkway Drive
What’s interesting is even at such a young age I had skipped those types of bands and went straight to Death Metal, Black Metal and was lightly dabbling in Grindcore so when all my friends would recommend me these bands I would just shrug them off because (at the time) I felt I needed heavier metal
So technically this will be my first full album experience with them and I’m excited to finally give you my thoughts on a band that has eluded me all these years!
-KIN
So this is the latest album by Deathcore band Whitechapel.
After listening to this record I can safely say I sure did miss out on some amazing music because what you get amongst these 11 tracks is an experience that is equal parts METAL and MELODIC
I absolutely love how this album can swing between the two different styles so easily and even blend them together when need be, it’s such an awesome thing to hear!
For me the production is really reminiscent of the era where these bands were in their prime! Not to say anything come out since is bad because this album is a clear testimony against that but it feels like they would be sticking to their strengths and making an album that their core fans would want to hear and that’s the analysis I get off this record.
It shines 2000’s Deathcore with a subtle note to the ‘Screamo’ era as well with that groovy yet heavy instrumentation, the way that the band can utilise the heavier moments and the softer more mellow moments for a more emotional context and feel make it feel nostalgic to me.
The vocals on this thing as well are absolutely amazing! What a performance by Phil Bozeman! I honestly at first listen assumed it was two singers (which isn’t too uncommon) where one does the death growls and screams and the other the clean vocals but nope, this is all him he’s going the Trivium, Of Mice and Men route which is badass!
Every time he switched the style up to a more melodic harmony I could physically feel the emotion of the words he was speaking and
the energy and passion he was giving off.
Now I don’t know if this how he regularly performs on albums but if it is then all the praise they got for the past decades are well earned and deserved! This thing has metal chart climber written all over it! For most of you, the recommendation to listen to a ‘Whitechapel’ album is as useless as someone telling you it’s time to eat when dinner is already on your plate, it’s self-explanatory. But for those who are like me and never listened to this band before, they are the real deal!
https://whitechapelmetal.bandcamp.com/album/kin
Link is above and trust me you won’t regret it! –Corban Skipwith
Lineup:
Phil Bozeman: Vocals
Ben Savage: Lead guitar
Alex Wade: Guitar
Zach Householder: Guitar
Gabe Crisp; Bass
Alex Rüdinger: Drums
Track list:
1. I Will Find You
2. Lost Boy
3. A Bloodsoaked Symphony
4. Anticure
5. The Ones That Made Us
6. History Is Silent
7. To the Wolves
8. Orphan
9. Without You
10. Without Us
11. Kin
Relentless Reviews with Corbz
Posted by Dave Wolff at 7:18 AM