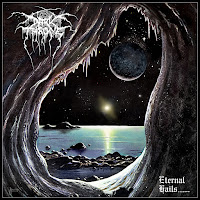 Band: Darkthrone
Country: Norway
Genre: Black metal, heavy metal, speed metal
Full Length: Eternal Hails……
Format: Digital album
Label: Peaceville
Release date: June 25, 2021
While some may argue it doesn’t have the same impact of “A Blaze in the Northern Sky” or “Under A Funeral Moon”, Darkthrone retain their attitude of doing what they feel on “Eternal Hails……”, going the organic route of writing songs with riffs and heaviness in a time when musicians rely more on computers and compressed sounds. That they’ve been active for as long as they have, grown on their own terms and created new directions firmly on the foundation of their roots proves that integrity doesn’t mean limiting oneself.
This album is as raw and uncompromising as anything they’ve done in the past. As they deliberately produce it with a slightly muddy and distorted sound they reinterpret the grimness those abovementioned releases personified. On “Eternal Hails……” they demolish, crush and flatten everything in their path, establishing there’s still a need for albums relying on instruments and love for heavy music. Their affinity for riff-laden songs led them to compose pieces lasting from seven to ten minutes, without a single moment that sounds like filler or becomes plodding or boring. In some ways, I’m reminded of Carnivore’s 1984 demo “Nuclear Warriors” featuring the epic pieces “World Wars III & IV” and “The Subhuman” which held your attention with the pure adrenaline that fueled them.
Via images of deep space, “Total Death” experimented with combining cold, graphic art with cold, raw production. “Eternal Hails……” seems to have perfected this after years of practice. Adorning the cover is David A. Hardy’s “Pluto and Charon”, designed in 1972 and said to be hugely inspirational. Recording at Oslo, Norway’s Chaka Khan Studio with Ole Ovstedal and Silje Høgevold engineering, Darkthrone create an ideal counterpoint to the atmosphere of that piece, breathing life into the vast distance between Pluto and Earth from the moment “His Master’s Voice” transitions from a somber intro to a relentlessly crushing guitar progression to kick things off.
Darkthrone likewise go a long way toward thinning the boundaries between 90s black metal, 80s classic metal and 80s doom metal. Honing their experimental period “F.O.A.D.” began in 2007, they’ve worked hard to find where the pieces of the puzzle fit. Now those pieces fit together tightly, creating a sound for them that’s entirely theirs. In many ways “Eternal Hails……” does for heavy metal what Celtic Frost’s “To Mega Therion” did for it in 1985. There is minimal use of vocal effects, keyboards and synthesizers, but they serve to enhance the impressions of doom and gloom that grow naturally from the core ensemble of guitar, bass, drums, and vocals.
Since the band makes a clear effort to redefine themselves without bending over backward trying to be “versatile”, everything they do with their material here feels right. The guitars and bass complement each other with a nice balance of atmosphere and bottom while the echo-laden vocals fittingly personify the void of space and the drums push the material along without overdoing themselves. Going back to the comparison of Hardy’s science fiction-based art and the songwriting quality, the implied journey from our home planet through the endless reaches of space to the destination of Pluto feels like we’ve discovered an ancient civilization buried under miles of ice but not quite dead yet. It’s an almost indescribable feeling and to experience it fully you have to listen late at night.
Using what they have and believing in the integrity of their work, Darkthrone spawns their finest moment in years, pushing black metal to its boundaries and beyond without the slightest bit of elitism. An essential listen for long-time fans. –Dave Wolff
Lineup:
Nocturno Culto: Vocals, lead guitar, bass, songwriting (tracks 1, 3-4), mellotron (track 1), Moog synthesizer (track 3)
Gylve Fenris "Mohawkwind" Nagell: drums, bass, vocals (additional), additional guitar, lyrics, songwriting (tracks 2, 5), Moog synthesizer (track 5)
Track list:
1. His Master's Voice
2. Hate Cloak
3. Wake of the Awakened
4. Voyage to a North Pole Adrift
5. Lost Arcane City of Uppåkra
Posted by Dave Wolff at 10:32 PM