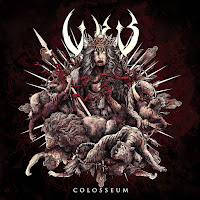 Band: W.E.B.
Location: Athens
Country: Greece
Genre: Symphonic extreme metal
Full Length: Colosseum
Format: Digital, compact disc, special edition vinyl
Label: Metal Blade
Release date: November 19, 2021
Album review time! And boy do I have a treat for all of you today!
W.E.B. (Colosseum)
So, what we have here today is a new album by the band recorded on 19/11/2021 featuring 9 stunning new tracks to sort through coming at just under 40 minutes in total length.
I must say, this album had me surprised but in the best ways possible because going into this I didn’t really know what to think, which although has a nice element of surprise behind it I can’t lie and say I never have moments where I wish I knew beforehand what I had install for me so I could figure out what to say about earlier and today that is definitely the case.
The one thing I love about this album is how grand and theatrical it feels, the product is crisp, beautiful and prestige while the instrumentation is divine, full proof and immaculate in almost every sense of the words.
This album contains a strong sense of ‘conceptuality’ which I absolutely love, nothing ever feels out of place or done by random, it feels calculated and thought out, carefully planned and strategically mapped out within the 9 tracks not a hair is out of place.
If I had to describe the sound, it sounds very similar to ‘Symphonic Black Metal’ with those above mentioned glossy instrumentation and luscious use of grand production. The one band that screamed at me most as maybe a point of inspiration for them is the band Carach Angren which is a compliment I don’t normally give out since that band to me is the strongest ‘Symphonic Black Metal’ band since Dimmu Borgir or early Cradle Of Filth.
I could go on and on about my love for this record but it’s something that my words just can’t do justice, it’s something you’ll have to experience with your own two ears and heart. It’s fantastic for a short album it really pulls no punches and leaves everything in the record itself, so full of passion and creativity that it really is one the stand out albums of the year! –Corban Skipwith
Lineup:
Sakis Prekas: Guitar, vocals
Hel Pyre: Bass, vocals
Sextus A. Maximus: Lead guitar
Nikitas Mandolas: drums
Track list:
1. Dark Web
2. Murder of Crows
3. Pentalpha
4. Colosseum
5. Dominus Maleficarum
6. Necrology
7. Ensanguined
8. Exaudi Luciferi
9. December 13th
Posted by Dave Wolff at 7:36 PM