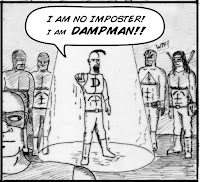 How much material have you recorded with those two bands since you became their drummer? Is anything available from them? If so, is it being streamed anywhere or do people have to order it directly?
Elkenwood released their single "Uncreation" digitally during Solstice of 2015, and we're currently writing and recording music for an EP with a tentative Winter release. Dragonsmead should have some recordings out later this year also.
What press feedback has Elkenwood gotten for the Uncreation single since its release?
Mainly positive fan feedback, and we got invited to play at a folk festival in New South Wales in May. No press feedback as of yet. Care to review?
How do you balance Elkenwood and Dragonsmead whereas you were previously putting your energy into one band? How do practicing and recording sessions usually go with these bands? Do they have their own studios where they practice?
Dragonsmead doesn't perform too often as all the members have their own commitments, and one of our lead guitarists Michael Varlet lives in Melbourne. Dragonsmead and Elkenwood rehearse at a practice space in the inner-city suburbs of Brisbane, which is convenient for all the members.

When you were in Malakyte you filmed some promotional videos and posted tour diaries on Youtube. Do Elkenwood and Dragonsmead plan similar developments once becoming more active?
For Elkenwood, probably not. For Dragonsmead, probably. The band is still in its early days so we shall see.

How often is LagerFest held in Brisbane? How many bands are usually booked to appear at these fests?
LagerFest is a festival run once a year. It was held this year at Brisbane venue The Triffid with the release of Lagerstein's latest album "All for Rum, and Rum for All", co-headlined with US 8-bit composer Rainbowdragoneyes. The festival has seen some varied line-ups, from punk, power metal, death metal, to industrial, as well as similarly-themed folk and pirate metal bands. I forgot to mention Lagerstein in my recommendations earlier, but if you or your readers are ever looking for some decent pirate-themed metal, I recommend them!
What is pirate metal and in what ways does Lagerstein personify that genre? Are there other pirate metal bands you know of that you would recommend?
Pirate metal is exactly what you think it is! I guess it's derivative of power metal and folk metal, but with a pirate theme to it. Lagerstein personify that genre in their stage personae and attire, their song themes, and some other cool stunts they do. Before they released their latest album, Lagerstein buried some treasure in an undisclosed location. The CD sleeve contained a treasure map as well as clues to find the treasure in the lyrics. The only other pirate metal bands I'm familiar with are Alestorm from Scotland, whom Lagerstein have done tours with, and Swashbuckle from US.

Do you eventually want Elkenwood and Dragonsmead to perform outside Australia in the years to come? Where would you want those bands to perform first?
In Elkenwood we're trying to gain as much of a following as possible and get more recordings released before we set our sights on any overseas shows. Same goes for Dragonsmead, since it's kind of a side-project supergroup for most of the members. I know for a fact that Gareth, Nic and Mel from Elkenwood would love to play some shows in Scandinavia somewhere, haha. I would love to perform with Elkenwood or Dragonsmead outside Australia sometime, but we still have a long way to go.

DRAGONSMEAD
-Dave Wolff
Posted by Dave Wolff at 9:24 AM