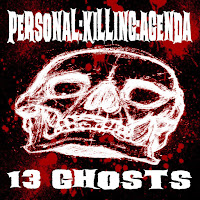 PERSONAL:KILLING:AGENDA
13 Ghosts
Independent
http://personalkillingagenda.bandcamp.com
http://www.youtube.com/psychokiller138
Listening to Personal:Killing:Agenda reminds me of when I listened to the symphonic ensemble Elend for the first time, reviewing their epic recording Les Tenebres Du Dehors. From the name of this project you would expect an album of brutal death metal, as it suggests an album with down tuned guitar and bass, blast beats, guttural vocals and graphic subject matter, but as we know surface impressions are often deceiving. I had a feeling I’d get something different from everything else I was listening to at the time, and I got exactly that. Few bands I have listened to approached the full blown classical narrative Elend achieved on that mind-opener of an album as they depicted the end of creation itself. There are exceptions that approach it to varying degrees, like Manowar’s Gods Of War, Luca Turilli’s Legendary Tales and of course this recording, given to us by artist Shane Dunn of Johnson City, Tennessee who has to be one of the U.S. underground’s hardest working musicians. Dunn, who has worked in many solo projects since 1998, started Personal Killing Agenda in 2010 and released more than 80 full lengths in the six years this project has existed. It would decidedly take a long time to check out the complete discography, but I suspect it would be worth it. Finding Personal Killing Agenda’s Bandcamp page was like stumbling onto a gold mine as a wealth of music is there to peruse if you’re so inclined. The tracks arranged for 13 Ghosts, all neoclassical pieces with strings and keyboards, were recorded without vocals or lyrics; each track offers its narrative for its given title and allows for your own imagination to take over. You get to envision where you see each disembodied spirit, their backstory and how and why they crossed over into the afterlife. You get to choose for yourself what time period you are in when meeting these ghosts, where you meet them and whether or not to befriend them and assist them in their goals here on earth. What’s more the songs really unlock your imagination and give you the opportunity to exercise it to the fullest extent you can. If this is just a sample of what Dunn is capable of, I’ve been hooked and strongly recommend giving his work a chance. -Dave Wolff