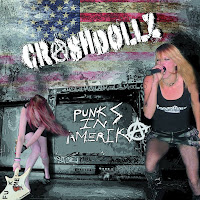 CRASHDOLLZ
Punks In Amerika
RadicLea Records
http://www.crashdollz.com
I was introduced to this Detroit band by Kat of Obscure Chaos zine, who put me in touch with guitarist Rachel Rekkit. Rachel in turn forwarded me the Soundcloud link to this album. I remember reading articles about the state of Detroit when the city was bankrupt for quite some time. The musicianship surely reflects that time period; you can almost feel the sense of extreme poverty and sense of mortal danger in every note. This was the city that gave us Death, a proto-punk band that wrote songs like Politicians In My Eyes and You’re A Prisoner, in the early 70s. Death was one of the first bands to openly discuss African American’s roles in the US before Bad Brains and Living Colour. Crashdollz do something similar raising points that have been the subject of debate for a good number of years. The songs on Punks In Amerika is a symbiosis of early punk and early metal that touches a lot on the role of women in music. This band’s position is clear as they make the argument that a female should be viewed as a legitimate musician and not eye candy. I relate this to the Lower East Side of New York, particularly from the 80s to the mid 90s, when the transgender lifestyle was in full swing and a frequent target of bigotry and local punks considered females equal to males while the mainstream looked down on them as ‘freaks’ and ‘sluts’ and not like the so-called ‘beautiful people.’ If you like Toilet Boys, you’ll appreciate Crash Dollz, as their ties to metal are similar in many respects. You have songs like Hellcat, Scumbag Superstar, Novakain, Stab The Ground, Getaway Man and Fuck Me Nation, which reawaken the aforementioned issues about women in rock and answer the question in no uncertain terms. The guitars are loud, distorted and slightly chaotic while Nikki Darling’s vocals project woman power over the cacophony with a vengeance. Recommended for those of you who are disillusioned with Britney Spears and other pop divas. -Dave Wolff