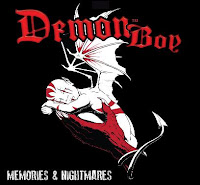 DEMON BOY
Memories And Nightmares
Independent
http://www.reverbnation.com/demonboy
Many mention Demon Boy in the same breath as Alice Cooper and Rob Zombie, to which there is much truth, and I agree there are similarities in theatricality. It is musically where Demon Boy takes the reins and moves to the forefront. I first came across Demon Boy several years ago with his version of the XTC classic, Dear God (track 9 on this album). The production value and Demon Boy's attitude are what struck me the most. Not always a fan of remakes, I thoroughly enjoyed the version the band did and it is just one of the tracks included on the CD. The first track on Memories And Nightmares is a DB staple, I Kissed a Dead Girl. Got to love any song that begins, ‘I kissed a dead girl asked her to marry me’! Next up is Little Red Riding Bitch. This darkly humorous take on the old Sam The Sham tune from the 60s is one of the fan favorites at DB's live shows as you get to see Red, the Wolf and Demon Boy himself act it out as the song plays on. On the third track, Pain and (to jump ahead) and on track 8, Posse Of The Living Dead, Demon Boy marries rock and rap in these collaborations with lyricist Richie Valentine. Being a metal fan, I was not sure I would enjoy these, but the music and vocals meld perfectly and are another layer of a band that continues to break barriers. Track 4, Ravenous, of all DB tunes would be considered his anthem. Ravenous garners more plays than any of the band’s songs on their social media sites and one listen will tell you why. Track 5, Cemetery Girl, was Demon Boy's first collaboration with dark poet, Rich Orth. What started out as poem by Orth became the compiling of three of his poems by DB. It starts as almost a guitar ballad, then guitarist Steve Noir hits a crescendo, DB's vocals kick in and a love song to a dead girl is born. The next two tracks get the party going, not that anyone could stay still. Born Dead and Party To The Grave are pure Demon Boy with music and lyrics written by the singer himself. Dead Tramp Super Model has that raw punk/rock n roll feel that permeates several of the band's songs, another get up and rush the stage tune. Last but not least is Zombie Dance, which from interviews I have listened to resulted from a phone call from Demon Boy to Rich Orth at 10:30 pm. DB wanted a song to release prior to an appearance in Las Vegas. Problem: the flight was early the next morning. Problem? We don't need no stinkin' problems. Several phone calls and instant messages later, Orth finished the lyrics and by 2am, Demon Boy composed the music and produced a great song. The band now is Chris Cyanide: 666 string bass, Alex the Executioner: guitar, Lightning Lou: drums, Skully: performer/background vocals, and Kicked out of Heaven and Spit out of Hell Demon Boy: VoKills. -Rrockhopper
,
Track list:
1. I Kissed a Dead Girl
2. Little Red Riding Bitch
3. Pain
4. Ravenous
5. Cemetery Girl
6. Born Dead
7. Party to the Grave
8. Posse of the Living Dead
9. Dear God
10. Dead Tramp Super Model
11. Zombie Dance
Posted by Dave Wolff at 7:50 PM