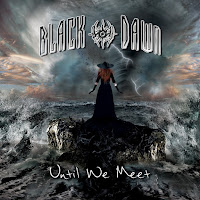 BLACK DAWN
Until We Meet
Blue Pie Publishing
http://www.facebook.com/blackdawnpage
The rock/metal scene in Long Island was long known for several bands with potential to leave a mark and had many opportunities but unfortunately never broke into the mainstream. Black Dawn was one alongside well-known locals Kronin, Spiders N Pigs, Violence Of Action, Absolut Drama, Voodoo Storm. In my early years of writing for Good Times I attended lots of shows and felt the energy as the bands I mention were hopeful to become prominent and receive attention of the national industry. This was before pop took over and pushed almost everything else into obscurity. Many bands are no longer active, though some of them still pay reunion shows. Voodoo Storm and Black Dawn performed the other weekend, and the energy was much the same as it was in 1995. I should add Maelstrom and Cold Steel from the thrash scene are gathering steam again and an active scene still exists for extreme music in Long Island. To get back to Black Dawn, their set was heavy and the gathered audience seemed to appreciate the passion and enthusiasm they put into their songs. It was as if I had time traveled back to ’95 or at the least the local scene never faded away. The band’s five song EP, released in 2014, reflects the energy of said performance and resonates of the same vibe that the scene is still vital. By first impressions they sound like a heavier Pantera with some subtle influence from Crowbar. This I get from the opening strains of Upon Your Lips with its crunch and brief pauses in the introductory guitar riff. Between this and vocals that are melodic and aggressive I see influence in nu metal gathered from the band’s 20 year experience. Black Dawn produced a promotional video for this song, with a narrative of a couple split up when one of them is recalled to a Mideastern country to fight an Islamic terror group (it’s not specified that this is ISIS but given current headlines the theme of the video is relevant). I don’t want to give away what happens in the video but you can rest assured it’s profound. I Could Never Be opens with foreboding guitars accompanied by melodic singing and slightly tribal percussion, building into a painfully slow chorus reminiscent of classic Black Sabbath. This pattern repeats like a perpetual cycle of introspection and longing until another section is introduced offering more groove like we heard in the previous song. The atmospheric guitars make for a personal favorite. Open The Gates stars with a rain effect, chanting bells and atmospheric vocals giving way to more heaviness. I Wanna Fly reiterates Black Dawn’s influence in Black Sabbath, particularly Ozzy and Tony Iommi, while Pray For Me is probably the most emotionally driven song on the EP, with all the elements I described and a Kirk Hammett-esque guitar solo. What most struck me about the band is their lyrics about lost love set to backgrounds of war and terrorism, which add impact to their music. -Dave Wolff