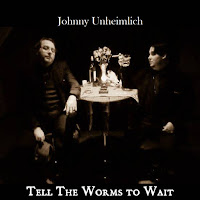 JOHNNY UNHEIMLICH
Tell The Worms to Wait
The Horror Of It All Productions
http://www.facebook.com/MarquisDeBlood
http://thehorrorofitallproductions.bandcamp.com
Binghamton, New York’s Johnny Unhemlich is an acquired taste for people who like acoustic alternative with a gothic flavor, but if you take the time to listen to Tell The Worms To Wait you’ll be doing yourself a favor. This is the project’s debut recording, released last December and produced by Mark Dickinson whose material is also available for streaming at The Horror Of It All’s Bandcamp page. The guitars provide a mellow theme but something menacing, subtle as the additional bass and piano, is lurking underneath. There is some effective interaction between the instruments, signifying the conflict depicted in the lyrics. Reading the lyrics of Ashes is enough to convince you that the musical arrangements are coming from a dark place as genuine as the sunshine and rainbows of traditional clichéd love songs. The songs here make the most introspective of Nirvana and Pearl Jam sound cheerful. Ashes is about someone who emerging from a relationship that tore him apart emotionally and spiritually, and it shows in lyrical passages as incisive as the speaker’s experiences with whoever left him devastated. This is made all the more incisive by a descriptive, poetic approach: “Oh, you've blown a hole between/Some things that were better left unseen/And now my bones are scrubbed down clean/Left in the ash of you.” If that sounds intense, wait until you hear the entire song. It’s like walking the Lower East Side in the earliest morning hours with no one else in sight, only the darkened buildings keeping your company. The songs that follow don’t ease the disturbing imagery established by what we just heard. The more the CD unfolds, the more you perceive that ages told relationship between sex and death, always told in different styles of verse by countless poets. If the finest of them were accompanied by soundtracks, it would sound something like this. The twist here is that he is sacrificing himself to heal from the memories of being dragged through anguish. With as little remorse as he was shown during that experience. From Burn to Tell The Worms To Wait you begin to realize the speaker is on a journey that will not end well, a journey you can’t help following, out of morbid curiosity if for any reason. The transition between sex and death is gradual, and frighteningly so, since you soon reach a point where there is no turning back. Leave This Ghost Alone is the bleakest stop in this excursion into the unknown. Here is the point of no return and from here the only direction is forward. From The Fox to The Wraith to Where The End Of The World Waits the speaker’s predatory side begins to show itself as he buries the nameless partner in his mind. This trip surprisingly ends with a sense of wisdom gained from all the pain and the process underwent to loosen it: “There's a broken road/Where the end of the world waits/Past the tree that's filled with crows/You will find me where I stay/In between the trees/We will carve ourselves a home.” In addition to all this, the album comes with a bonus track recorded and mastered by Dickinson, Duke’s Lullaby. Tell The Worms To Wait was released in 2015 and can be purchased at Bandcamp. -Dave Wolff