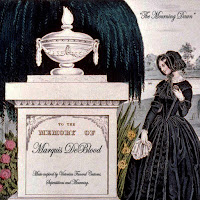 MARQUIS DE BLOOD
The Mourning Dawn
The Horror Of It All Productions
http://www.facebook.com/MarquisDeBlood
http://thehorrorofitallproductions.bandcamp.com
This is one of two full lengths released for streaming on Marquis de Blood’s Bandcamp last March; the other is Weeping Veils. Earlier I raved about Shane Dunn’s project Personal:Killing:Agenda and its take on neoclassical music; how it let you imagine the scenarios depicted by the instrumental pieces arranged by Mark Dickinson. The Mourning Dawn also allows the listener to use his imagination, though the difference here is you are carried back to the Victorian Era of England and left to explore the ancient mansions and graveyards as the music sees you along. The structures you pass become more tactile and real as you travel onward, as are the people you come across in this excursion into the distant past. The Mourning Dawn is a virtual wet dream for fans of goth and classical music, being inspired by how death was viewed during the Victorian Era: its funeral customs, periods of mourning and the superstitions of the time. The tracks are accompanied by a brief lyrical blurb explaining what they represent. There is Nowhere on Earth Man can Escape Death is self-explanatory as it sets the mood; putting the idea across that everyone meets the Grim Reaper at some point in their time on earth. It reminds us to accept our mortality and to savor each moment you’re living and breathing. Along with its full blown symphonies, this recording is worthwhile for its educational value. You get insight into the Victorian Era that reflects on the fashion of the time, its social hierarchy and etiquette, its family connections and lastly its sense of mystery and wonder about what’s on the other side, or what might return from it. What I most liked about The Mourning Dawn was the subtle interplay between instruments and the sudden change in mood as one song led to another. One superstition stood out, noted in Funeral Procession (The Black Parade): “It is bad luck to meet a funeral procession head on. If you see one approaching, turn around. If this is unavoidable, hold on to a button until the funeral cortege passes.” Another superstition noted in Weeping Veils: “Mourning dress is actually associated with a deeply rooted fear of the dead returning. When veiled and cloaked in black, it was thought that the living were invisible to the dead.” The CD release of The Mourning Dawn features promotional videos for the title track and Remember Me (Memento Mori). -Dave Wolff