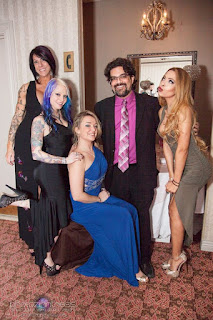 Do your models undergo interviews or produce demos for your consideration?
Usually I get a few photos for a general feel. This year, I was going for a bit sexier feel, but in previous years, I have used women of all shapes and sizes. It is after all about survival.
Has shooting women of different sizes contributed to breaking expectations of how models should look?
Yes I think so. The first calendar was very much friends, who had not really done this sort of thing before, modeling for a calendar. Obviously the Chamber Of Horrors girls were used to getting into costume.
Which of your models have been easiest to work with from the time you started the calendar?
Oh every single one! They are all so amazing and we have a great family bond between a lot of them that frequently make appearances at conventions and events. We were asked to be presenters at this years Macabre Film Festival! It was awesome! I have a few who I am very close with and work with on other projects, Melissa Anne, Kristina Amato, Cait Fazio, Shelly Scarlet... I would not want to name them as favorites because I do love them all, but these are the girls who I feel like enjoy working with me as much... I hope!
How many Women Of Armageddon calendars have you released to date?
Let’s see... 2012, 2013, 2014, 2015 had Men AND Women and now 2016. There are six different calendars! And two decks of cards. Countless posters and stickers. It’s a merchandisers dream. The best response to the first calendar that I got was this: We took it to a comic book trader’s show, looking for an Illustrator. I was thinking it was a great idea for a comic book and I could get someone interested. I ran into a gentleman named Chris Notarile. He was the Illustrator for TV Guide for twenty years. He held the calendar and looked at me and said... What is this? A Movie? A Show? I said it’s a calendar. It’s a concept. I think it would make a great comic book! He said it was GOLD. You have an original concept AND an original presentation. You should do a PhotoGraphic Novel. The lights went on and it has been in my hands ever since. I have concepted out a basic storyline and have been working on it slowly, but I have finally found a writer I like and has been pushing me with some great ideas, that evolve the story a little at a time. We should be shooting something pretty cool on the next weeks!
What can you reveal about the storyline for the photographic novel you're developing?
Well the storyline will be more like an “origin” story to set up the whole Women of Armageddon universe. So the idea is these beautiful women all survived the apocalypse and are surviving together, but how did they get that way? The Women of Armageddon to me is very much like “Planet of the Apes” where we will be able to follow the adventures of these women in episodic fashion. I don’t want to reveal too much, but I think it will mix cinematic styles of Quentin Tarantino meets Blair Witch meets any of the Marvel movies. I can only reveal that it’s about a group of women who, based on their circumstance, survive an apocalyptic event.

Who is the writer you are working with and what ideas has he contributed?
The writers name is Lee Kolinski. I met him on the set of a film he wrote called Junkie Heaven. He’s been helping me with dialogue, and creating a unique presentation format. I think the Calendar will evolve into a digital media format. Like a calendar app that will reveal new content daily but act like your Google Calendar or Icalendar.
What is the plot and storyline of Junkie Heaven? Was it released to theaters or can it be viewed on the web?
Junkie Heaven is an interesting short film about a heroin addict who overdoses, but is greeted in the afterlife by a supernatural force that grants him another chance, but of course, conditionally. It was an original concept directed by a friend of mine Steve Sage who introduced me to Lee. I think the film is still making its festival rounds, but should be available online next year.
How soon do you expect to release Women Of Armageddon on digital format? Will you still release physical copies of the calendar or making a complete transition?
I’m hoping to start filming some initial segments this month! Doing some auditions and polishing up the presentation of it all. I’m really hoping to grow it slowly and organically as it has been, but with more focus on story. It’s been all visuals up until now. I think when people see there’s something behind it will flourish some more as well. It’s always been somewhat about the nostalgia as well. That has always been a big influence, so there’s a genuine aspect to it when I release a calendar. I like to believe that people still like to hold the artwork in their hands, turn the pages, and look at it over and over.
Women Of Armageddon
-Dave Wolff
Posted by Dave Wolff at 8:18 PM