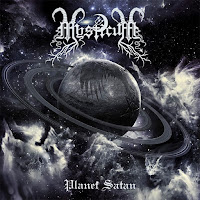 MYSTICUM
Planet Satan
Peaceville Records
http://www.mysticum.com
The song that drew me into this Norwegian industrial black metal band was “Let The Kingdom Come” from In The Streams Of Inferno. I don’t remember exactly where I first heard the song, but I do remember it included a sample from The Evil Dead. From a scene with a Candarian demon-possessed human releasing an unearthly howl from being impaled through the back, then regurgitating a whitish liquid. These sounds enhanced a slow industrial sounding riff toward the end, creating a sonic effect I hadn’t quite experienced before and making me want to hear more. I remember hearing the late Mayhem guitarist Euronymous was a big fan of the band, and I more recently heard Mayhem drummer Hellhammer worked with the band before they recorded their debut (the black metal documentary Det Svarte Alvor includes a clip of Hellhammer practicing with them). I was fortunate enough to see Mysticum at the (now defunct) Wetlands in NYC and bought their album soon afterward. The liner notes announced the next full length was to be christened Planet Satan. It was a long wait before the new album, but worth the years between these full lengths. In a simple explanation, Planet Satan is a huge improvement. The songwriting, musicianship, industrial effects, drum programming, production and the cover art are all light years ahead from The Streams Of Inferno. Around the time that was released black metal bands and members of black metal bands were branching out and experimenting with techno-industrial sounds. Impaled Nazarene did and there were side projects like Raism releasing material. Then there was Darkthrone drummer Fenriz’s side project Neptune Towers. Planet Satan is the closest I’ve heard a band come to perfecting this in years. The only aspect of their sound I would have liked to hear them retain on this full length is the tight high-pitched scream that was Cerastes’ lead vocals. Those vocals were uniquely creepy and fit their concept well. Aside from that the atmosphere of this album is flawless and takes you on a journey through the cosmos. I should note much of the band’s vision comes from experimenting with hallucinogenic drugs, as evinced by LSD and songs like Black Magic Mushrooms from their split with Audiopain. You might say Mysticum is black metal’s answer to acid rock in that regard, only darker, more atmospheric and more occult driven. Planet Satan was released in 2014 and the band are still aggressively promoting their new material today. -Dave Wolff