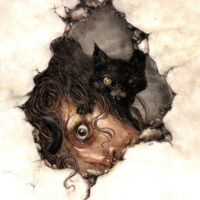 EDGAR ALLAN POE’S THE BLACK CAT
Read by Anthony D. P. Mann
Music by Fabio Frizzi
Art by Jeremy Hush
Cadabra Records
Release date: August 17, 2018 (Vinyl only)
Cadabra Records, the new, hopefully groundbreaking independent label, returns with yet another classic of horror literature, this time from Edgar Allan Poe. Planned for August release, The Black Cat pays as much homage to Lucio Fulci’s 1981 movie version of Poe’s tale, of which noted composer Fabio Frizzi was set to score the soundtrack, as it does to the story itself. It is also his latest collaboration with Cadabra Records, the first being a reading of Lovecraft’s The Picture In The House, reviewed at this blog in September of 2017. As noted in that review, you may know Frizzi for his work on other Fulci films like Zombi 2, City Of The Living Dead, The Beyond, Manhattan Baby and House Of Forbidden Secrets. Those are horror classics in their own right, and if you’re a fan of any of them you won’t doubt that Frizzi was made to score this reading. Having gotten his start as a member of the trio Bixio-Frizzi-Tempera from 1974 to 1979, he went on to score Fulci’s movies and mainstream productions like Kill Bill. He is reportedly excited to be involved in a new adaptation of The Black Cat as his plans to score Fulci’s film version fell through. As he was quoted, "The Black Cat is back. And with enthusiasm, the magical flow of creativity is again with me!”
Cadabra’s release of The Black Cat marks the return of regular reader Anthony D. P. Mann, a stage/screen actor who in recent years appeared in 2011’s Sherlock Holmes And The Shadow Watchers, 2012’s Terror Of Dracula, 2014’s Phantom Of The Opera and 2015’s A Christmas Carol. His reading experience comes from adapting Poe, Lovecraft, Charles Dickens and others. Jeremy Hush’s surreal art makes his visual interpretation of The Black Cat fitting, depicting the story’s demonic and insane themes with equal clarity. As an aside I recommend checking out his official website for several samples of his work, as well as finding as much information as possible about the others involved in this recording. The collaboration of these talents brought together is like a rare stellar conjunction, if you believe in such things, since their contributions complement one another distinctively. Hush’s cover artwork is but a taste of what waits within; Frizzi’s musical score accompanies Mann’s reading with a disturbing proficiency as the adaptation descends from innocence to derangement, making for a horrifying performance. Cadabra will be releasing The Black Cat in single album format and an exclusive double album with an isolated score. Both planned releases are pressed on 150-gram colored vinyl, printed on deluxe heavy weight tip-on gatefold jackets, and including liner notes by Frizzi and author Fabio Capuzzo (Goblin, Seven Notes In Red) and finally including a 24" x 36" poster. Preorders are available through Cadabra Records. -Dave Wolff