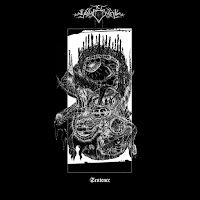 EIGENGRAU
Sentence
Hammerkrieg Productions (USA)
Place of origin: Sydney, Australia
Genre: Occult black metal
Release date: May 5, 2018
Cover art by Rev. Muk
Available at Youtube and Bandcamp
This is Eigengrau’s second EP following their 2013 split release with Zebulon Kosted and 2016 full length Verse (both available through Hammerkrieg Productions). It’s a weird experimental mix of old Impaled Nazarene, old Beherit, industrial and grindcore/noise ala Masonna (Japan) and Gonkulator (USA). The four tracks recorded for it are an acquired taste for warped, twisted extreme music fans. Luckily I am one of them so not only could I handle this material but I became increasingly curious as to the deformed, dissolute cognition that spawned it. This band was interviewed in Occult Black Metal zine the month the EP came out, explaining they sought to create music no one had previously heard. They compared Sentence to the sonic equivalent of a car accident and added these songs came about from a process called automatic writing in which a composer examines his subconscious and writes what was found there, far beneath one’s façade of what is considered pleasant in terms of songwriting. Sentence is the nightmare you can’t remember upon waking, likely because there was a part of your higher mind that pushed it far back into the shadows where it wouldn’t be retrieved. The images were just too disturbing to think of in the daytime. Possibly a lot of the discordant appeal of Sentence comes from members of the band having a background in witchcraft, Aleister Crowley and chaos magic; if you listen long enough you may begin to feel something inexplicable creeping forth from the tumultuous instruments and cryptic background sampling. Repeated listening may lead to a sort of transcendental experience you’ll want to frequently participate in. With bands like this there is but one way to find out, if you dare. -Dave Wolff